The taxi rank on the bottom block will move back to its original Lords Place position as the FutureCity upgrade of the area moves into the next phase.

The taxi rank upgrade is complete and the rank will be operating as normal from 3pm Friday June 4. 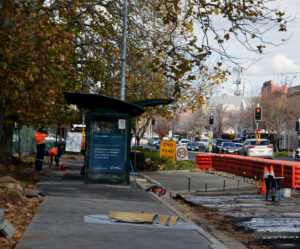 Concrete was poured at the Lords Place rank on Wednesday

Orange Mayor Reg Kidd thanked taxi drivers and customers for their patience as the upgrades took place and the rank was moved to the northern end of McNamara Street.

“The rank had to be moved temporarily for the upgrade and the drivers nominated McNamara Street,” Cr Kidd said.

“The upgrade to the Lords place rank includes building a raised platform which is level with the footpath, making the rank far more accessible for people with mobility concerns.

“Because the cars will pull up level with the footpath, we’ll be installing bollards to make clear the divide between the road and the footpath. In the meantime we’ll have temporary protection barriers in place.

“The footpath has been upgraded to a concrete footpath which looks darker to better suit the heritage nature of the park.”

The rank will be operation as normal from 3pm, Friday however it is expected the rank will move for one day only as the road is resurfaced in the coming months.