By Council CommunicationsJuly 7, 2021News
No Comments

Here’s some of the key decisions from the 6 July Council meeting.

Last night’s meeting supported a campaign to paint the trunks of two trees blue and to install park benches that are coloured blue (or paint existing benches if appropriate) to highlight problems of suicide prevention.

The motion to support the campaign came from Cr Tony Mileto.

The Blue Tree Project, is an international awareness campaign which began in WA. Hundreds of trees have been painted blue around Australia to encourage people to speak out when doing it tough from mental illness.

Council staff will be asked to identify several dead trees which could be considered for painting.

The park bench initiative is being organised by the Orange Region Suicide Prevention Network (ORSPN), a group of local volunteers working towards preventing suicide by awareness raising and support initiatives.

A draft masterplan which was on exhibition for community comment, attracted seven formal submissions and 192 responses through the YourSay Orange online platform.

The most sought after infrastructure upgrade was for more boardwalks and viewing platforms (84 people). The next three groups of infrastructure (all with 74 responses) were fully accessible paths through the precinct, boats or kayaks for hire and finally, more adventure equipment (outdoor gym, commando course).

Of notable interest was the number of responses to the option of “Nothing, I don’t want any changes” with only 4 responses out of the total of 192, indicating there is a strong appetite for improvements.

The independent consultant who drafted the report was also asked to explore additional access to the precinct that would be family friendly as well as connecting (if possible) to the Pinnacle and Mt Canobolas.

While some neighbours are happy to work with Orange City Council to create these corridors, others are extremely concerned about access through their land. This is for a range of personal reasons and the concern is understandable.

The recommended course of action is to not actively pursue any access where the owner has expressed concern. Council can note the potential for future access and if the land becomes available for purchase or the owner has a change of mind then revisit the issue at that point in time. For the purposes of a recommendation this course of action has been called ‘passive appropriation’. In some cases the ownership may not change for decades and in that situation there would be no action taken.

Last night’s meeting decided to go ahead with plans to stage a series of indoor music concerts in the coming months. The Council decided to spend up to $20,000 towards the FutureCity events to be held in local businesses in the CBD area. 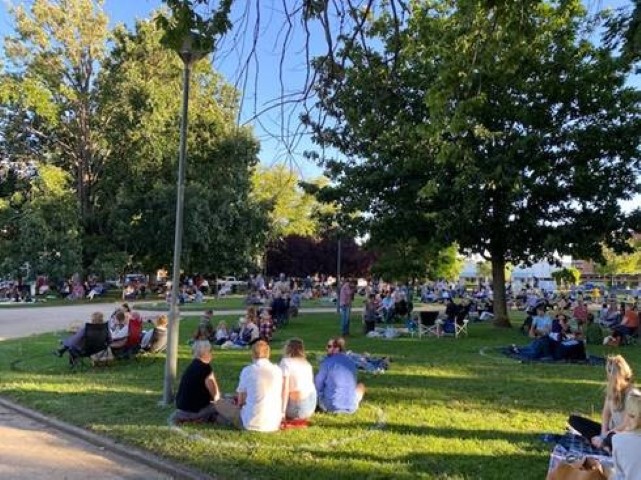 The meeting heard dates have been set for the Future Tunes outdoor concerts to re-launch in the warmer months later this year.

The first concert is planned for Friday 24 September in McNamara Street to celebrate the activation of this Future City project area.

Other dates for outdoor Future Tunes and/or Future Flix in Robertson Park are set as:

Last night’s concert also decided to go ahead with plans to sponsor the Squeeze Music Festival to tune of $10,000 to be held at the same Heifer Station venue which hosted the Day on the Green concert.

Last night’s meeting gave the go ahead for a new lease to be prepared for the Emus Rugby Union Club grounds.

The lease to Emus Rugby Club of Endeavour Oval and land where the club house is situated has expired and it is now necessary for a new lease to be entered. In negotiation the terms of a new lease, Emus have requested additional land to the north of the outdoor amenities, being part of 94 Woodward Street, be included in the leased area to enable the construction of a women’s amenities block.

The club has a water licence for 45 megalitres. Of this, Emus use averages 15 meg a year. Emus have agreed to transfer 20 megs of their water licence to Council which will be used as back up in times of need.