The Orange economy is in a strong position and is reaping the benefits of hosting the region’s largest construction sector, according to the city’s mayor.

In the face of media coverage this week about retail sector uncertainty, Orange mayor Cr Reg Kidd has released a snap-shot from the latest data which lifts the lid on Orange’s growing economy and solid business prospects.

“Media speculation this week suggested department store chains are reviewing their store-front business, “ Cr Reg Kidd said. “While the retail sector is struggling in some country towns, we’ve got a shopping centre that’s spending millions on a major upgrade to make it very attractive for new retail tenants.”

“Don’t take my word for it. Corporate investors are looking at Orange’s prospects and voting with their feet. Let’s look at the facts.” 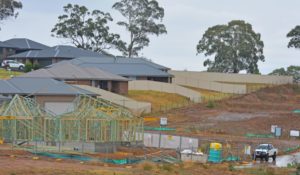 CONSTRUCTION : Orange’s business economy is benefitting from high levels of activity in the construction industry.

According to the data released by the mayor :

Around 300 new residential buildings a year are being built in the Orange local government area, at a value of more than $88 million and a further $12 million is being spent on residential renovations. In the last financial year there was a further $125 million in non-residential construction.

“That adds up to $100 million in residential confidence that the city is going ahead, and a total construction industry in Orange approaching one quarter of a billion dollars a year. These figures don’t include the major $50 million Bloomfield Medical Centre, “ Cr Tony Mileto said.

So far in 2018/19 Orange City Council has approved 179 new residential dwellings at a value of $57 million and renovations/additions in excess of $6.6 million, a total of more than $63 million.

“When you look at the figures comparing nearby centres, Orange comes out way in front,” Cr Tony Mileto said. “Orange City Council approvals are almost $20 million greater for the year to date than the combined total of our neighbouring cities who have a year to date total of $168 million and $72 million for total approvals respectively. “

Orange Mayor Reg Kidd said he was encouraged by the latest information.

“Individual businesses will always be facing challenges, but if I was going to choose a regional city to set up a new business, I know where I’d be choosing,” Cr Reg Kidd said.

“Once again it was so refreshing recently to meet with newcomers to Orange our latest newcomers lunch. It’s a breath of fresh air to talk with more than fifty new residents who’ve looked around and decided for a host of reasons to make the move to Orange. They’re loving it here. They’re seeing all it has to offer.”

“On top of this construction activity, Orange is now the headquarters of the some of the expanding NDIS providers, we’re the base for the new Regional Investment Corporation, Quest apartments and the new private hospital are making huge progress. It’s great news.”

“We’re not resting on our laurels. Through the ActivateOrange strategies, Orange City Council is taking on the next challenges, such as getting the Life Sciences precinct off the ground.”