The bulky waste collection is now under way from the first of the houses on the eastern side of Orange.

Houses on the eastern side of town were given a deadline of 31 January to have their bulky waste on the nature strip, to make sure it would be there in time for the collection.

Because it takes so long to cover every house, the pick-up on the eastern side of town could happen any time over the next two weeks. It’s not possible to say when the trucks will get to each address, but they will only be collecting once. If some residents didn’t have their waste out by Sunday, there’s a chance they may have missed out. 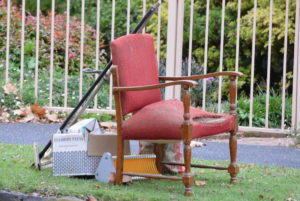 A simple way to figure out if the collection has happened in your street is to check out the waste put out by your neighbours. If it’s already been collected from their house, then it’s too late to put it out at your house.

If residents have access to a ute or a trailer, they can come to the Civic Centre and get a voucher that lets them take a load of this bulky waste to the Recovery Centre for free. Yesterday residents collected fifty of the new free vouchers from the Civic Centre.

A reminder too, that this time there are three separate trucks that are collecting either whitegoods, metal items and other bulky waste. We can recycle white goods and metal but only if they are placed in separate piles.

That means if you see one truck come by and collect some waste but not everything, that’s not a problem. The other trucks will be along later.

The deadline for people on the western side of Orange is Sunday 14 February. If you live along the blocks around Anson Street it’s worth having a closer look at (Page 6 of the Waste Booklet ) the map on the Orange City Council website to be sure whether your house is in the eastern or western sides of town.