Businesses urged to find out about Government zoning reforms

Local businesses and residents are being encouraged to find out more about proposed changes to business and industrial zones in Orange.

In its new strategy called ‘employment zone reform’, the NSW Department of Planning is reducing the statewide system of seven business zones and two industrial zones, down to a new system of five zones.

Following preliminary consultations, Orange City Council made a submission to the Department with concerns that changes would allow bulky goods retail outlets, currently confined to areas such as the Orange Grove Homemaker Centre, to open in areas such as William Street or Endsleigh Avenue. 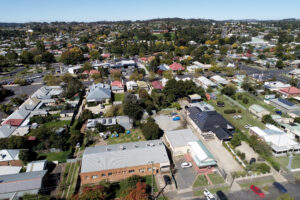 EMPLOYMENT ZONE REFORM: The NSW Government has proposed changes to business and industrial zones in Orange.

The change in zonings could also let smaller neighbourhood shopping clusters, such as Greengate or Alpine Stores expand to the size of the North Orange Shopping Centre, changing Orange’s current focus on the CBD as the city’s main retail area.

Orange City Council tries to protect the role of the CBD as the primary retail centre for the whole community. There was also concern the changes could let retail fragment to other parts of Orange.

The plans are now on exhibition on the Department’s Planning Portal and comments have been invited.

Orange City Council’s Planning & Development Committee chair, Councillor Jeff Whitton said the Council is yet to decide whether to make a further submission.

“The Planning Portal is well set up for people to find out more,” Cr Jeff Whitton said.

“If they don’t know already, I’d encourage local business owners to check which new zone they would be in.”

“I’d also encourage residents who live next door to neighbourhood shops, to find out what zone they are in and then to find out how much those centres would be allowed to expand. Currently, while we have height restrictions in areas like the CBD, we don’t have the same height limits for neighbourhood shopping centres.”

Under the changes, a developer would be able to open a car yard where there was once a neighbourhood shopping centre. A bulky goods retailer might open their doors in William Street, rather than having them all in the one location, such as the Homemaker Centre.

“Under these proposed statewide changes, all councils would have to adapt to the reduced number of zones available and this would affect where new developments could go in the future,” Cr Whitton said.

“Following our submission, the department made some changes but we’d like them to go further to protect the local arrangements that Orange has in place.”

To view the details of the exhibition and make a submission, visit the Department of Planning’s Employment Zones Reform webpage for general information on the reform process. The current exhibition period for community comment runs until 12 July this year.