CBD lighting upgrade set to improve safety and save money

Footpath lighting upgrades in the central business district are on track to improve safety for pedestrians and save Orange City Council thousands of dollars in running costs.

In the $1.7 million first stage of the project, 3.5-metre-high poles are being installed every 15 metres along both sides of Summer Street, from Sale Street to McNamara Street, while six-metre-high poles have been installed in Anson Street. 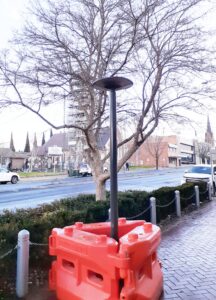 LET THERE BE LIGHT: One of the LED pole-mounted lights that are being installed along Summer Street.

“These super-efficient lights also have smart functions such as reporting back to base when a light fails. They can also be controlled remotely via computer and can be dimmed to blue,” CR Reg Kidd said.

Contractors are currently excavating sections of the Summer Street footpath to install cables for the new lights and extra conduit for fairy lights in the trees.

Light poles installed along Anson Street will increase safety for pedestrians walking between the CBD and the new DPI building in Prince Street and will also complement new bus routes planned for the area.

“We want to encourage them to come down to Summer Street and a major part of that is to ensure they can do it safely and conveniently,” Cr Jeff Whitton said.

Future stages of the Whiteway project will see the lights extended further along Summer Street to eventually cover from Hill Street to William Street.