By Council CommunicationsMay 21, 2020May 25th, 2020News, Waste
6 Comments
Orange residents will be asked what they think about the re-introduction of a city-wide bulky waste collection.

The latest Orange City Council meeting decided to put the draft annual budget on display for community comment. The draft budget includes the re-introduction of a city-wide bulky waste collection, paid for by an extra waste charge on rate-payers.

Under the proposal every rate-payer would be charged an extra annual waste fee of $11.35 for annual bulky-waste collection, whether they use the service or not. 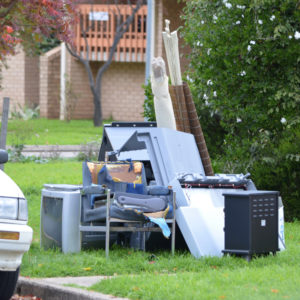 Orange Mayor Reg Kidd believes there will be support for a bulky-waste collection.

“Since the bulky-waste collections were discontinued a number of years back, there’s been consistent calls from sections of the community for them to return. Deputy Mayor, Cr Sam Romano has been very passionate about this issue, and I’m pleased it’s back on the agenda again. ” Cr Reg Kidd said. “I think the collections can be organised so that more residents will make use of them.”

“We’re looking at organising the collection event so that more materials, such as steel and waste refrigerators containing gas, can be collected separately for recycling.”

“While a ‘user-pays’ charge is only paid by people who use the service, it’s important to remember that some members of our community can’t afford this option,” Cr Jeff Whitton said. “An across-the-board charge, paid by every ratepayer, can be much lower.”

“The important thing now is for residents to tell the council what they think about this idea, by visiting the YourSay Orange site and completing a simple online survey.”

An online discussion and survey will ask community members which of a number of options they prefer. The results from the online engagement would then be considered by the Council.

As well as across-the-board charge, the draft budget also includes continuing with the current user-pays system where residents can order a collection of two cubic metres of bulky waste from their residence. That resident then pays $220.25 for the service.

The report to the council’s budget meeting also raised the option of a new user-pays system where if at least 30 residents order a two cubic metre collection for the same time, the charge would be reduced to $82.50 for each of those residents. This option is currently not in the draft budget.

It’s expected the council would consider the results of the community engagement when deciding which options to begin in the coming year.

To make sure the survey is as accurate as possible, residents must register with the YourSay Orange site.

Registering with YourSay Orange is quick and easy. Simply follow the prompts to add a screen name and an email address.

Tell the Council what you think about the bulky-waste proposal, by completing a quick online survey.