By Council MediaNovember 26, 2020News
No Comments

Flying-foxes have arrived in Orange for their seasonal visit, with hundreds of the furry critters spotted in Ploughmans Lane.

The number of flying-foxes here is expected to reach a couple of thousand over the next few months, with sightings of both the Little Red Flying-fox and the Grey-headed Flying-fox, two native Australian species.

Flying foxes have visited Orange during the warmer months on five occasions in the past decade, setting up temporary ‘camps’ in locations around Orange. 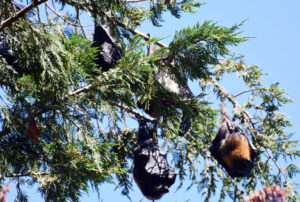 LIFE UPSIDE-DOWN: Flying-foxes have returned to Orange for the warmer months.

The first Flying-foxes were spotted about three weeks ago.

Orange Mayor Reg Kidd said this is the earliest Flying-foxes have set up camp in Orange, with the animals usually not arriving until December.

“It means the city was only Flying-fox-free for about two-and-a-half months, with the last of the Grey-headed Flying-foxes staying until August, the latest they’ve ever hung around,” he said.

“Their early arrival points to the reason Council has decided to develop a Flying-fox camp management plan.”

Orange City Council engaged independent environment consultants and Flying-fox experts Ecosure to prepare a draft plan, to guide the Council and the community to manage the animals within the boundaries of state and federal government threatened-species legislation.

It will offer strategies to minimise disturbance for residents and preserve the local environment while also protecting the animals, particularly the Grey-headed Flying-fox, which is listed as a vulnerable species at both a state and federal government level.

Orange residents have a wide mix of views regarding Flying-foxes, according to a recent survey conducted to gauge community attitudes towards the animals.

The survey was completed by 273 people.  About a third said they’d had a negative experience of Flying-foxes, a third positive and a third ambivalent.

Damage to vegetation, fruit loss at orchards, smell and excrement were the respondents’ main concerns, while participants also indicated strong support for the protection of Flying foxes, with concerns for their welfare and loss of habitat.

Seventy-three per cent of survey participants supported re-vegetating areas to create alternative habitat in other locations, while respondents also supported education campaigns to build awareness of the critters such as informative signage in Cook Park, an annual bat night, fact sheets and online resources.

Ecosure, which is currently hosting the virtual National Flying-fox Forum, will use the survey results in developing the camp management plan, which is expected to be delivered to Council by the end of the year.