To make this goal a reality, pedestrian safety has been a key consideration of the plan every step of the way.

One of the main strategies in Stage 1 of the project is to better connect the Civic Precinct with Robertson Park. 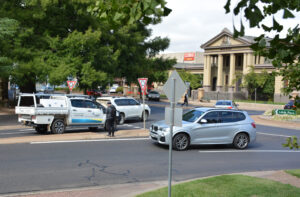 TRAFFIC: A pedestrian crossing near the roundabout currently has to deal with four lanes of traffic.

However, a main obstacle in achieving this is the four lanes of traffic pedestrians have to cross at the Byng Street and Lords Place roundabout.

In their final report to council, urban designers SJB Architects said double lane roundabouts were potentially unsafe and difficult for pedestrians of all ages and mobilities to cross.

They proposed to make the intersection safer for pedestrians and drivers alike by narrowing the double lane roundabout into a single-lane roundabout.

This allows someone on foot to cross the road more safely as they only have one lane of traffic each way to assess.

Drivers too would only have to assess one lane of approaching traffic before entering the roundabout.

It would also enable the pedestrian refuge in the centre of the street to be widened, which would be more user-friendly for people with a disability and people with prams.

Upgrades to the kerb would also include ‘pram ramps’, with wider access and a better gradient to make it easier for those pushing prams to cross the road.

Westbound traffic coming from Peisley Street would merge from two lanes into one lane near McNamara Street.

Traffic modelling study found the change would still achieve the same level of service for traffic volume through the roundabout.

Traffic simulations taking into account population growth and increased traffic volume, projected all the way to 2038, found the single-lane model would have no negative affects on traffic volume or flow in future.