One of the main objectives of Future City is to make Orange’s CBD more walkable. But why?

There is a direct link between a thriving economy and making our CBD easier and safer to get around.

It’s generally agreed that walking is better for people’s health than driving. It’s also true that more people on the street is better for retail businesses and pollution reduction.

This doesn’t mean fewer car parking spaces in the Orange CBD. The switch to nose-in parking is tipped to increase the number parking spaces. The Future City recommendations explore the benefits of expanding car parks on the outskirts of the CBD. 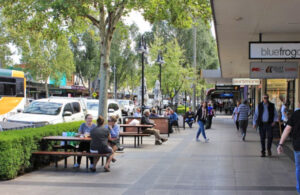 Many people are used to the convenience of pulling up in their car, out the front of the shop they’d like to visit, buying the item they came for and then jumping straight back into their vehicle and leaving the area.

But what if that person had to park one, or two, or even three blocks away?

On their way walking to their shop, what if that person passed a boutique clothes store, that was having a sale and stopped in for a look? That person may pass a bakery and decide to grab a cake for afternoon tea, or pass a florist and grab a bunch of flowers to put on the dining table.

Future City is about creating spaces where people on foot are encouraged to gather, encouraged to ramble through on their way home, and encouraged to browse shops as they duck in for the groceries.

To have your say on proposed changes to the CBD to make it more pedestrian friendly, click this link and complete our survey on our YourSay Orange website. Make sure you get your submissions in before December 2, 2020.

Council employed urban designers, SJB, to create ideas for Future City. They found the Orange CBD isn’t as user friendly for pedestrians as it could be.

The architects found safety was a concern for people as they moved around the inner city. They were worried particularly when trying to cross the road near roundabouts, by the speed of cars and driver behaviour.

That’s why part of the design is about slowing-down cars in the CBD, making it safer for pedestrians. The quality of footpath lighting is already being improved.

A proposal is being explored to replace four lanes of traffic in Summer Street to two lanes.

It’s about creating more areas in sections of Lords Place and Byng Street which are shared between drivers and people on foot.

A much wider median strip down the centre of the road, and nose-in parking on either side, will mean a single-lane in each direction for traffic. This is turn will mean slower traffic speeds, perhaps with a 40km/hr speed limit in the inner city area.