The next stage of footpath upgrades in Lords Place has begun as the FutureCity project steams ahead.

From Tuesday, June 8, crews will begin to dig up and rebuild the footpath on the western side of Lords place, between Summer Street and Byng Street. 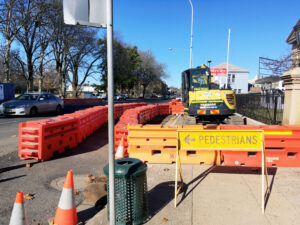 Pedestrians are protected by water filled barriers in Lords Place

Upgrades on the kerb have been completed with the existing material crushed and used as the “bedding” or base, of the new concrete footpaths.

This next phase comes as the opposite footpath, next to Robertson Park is all but completed.

The bottom block taxi rank is also in operation in its usual Lords Place location as of last weekend.

Orange Mayor Reg Kidd said the FutureCity upgrade of Lords Place was progressing well and to the expected time frame.

“People won’t have access to the western footpath while it’s being upgraded, instead Pedestrians will use a sectioned off part of the road in Lords Place to travel from north to south and vice-versa,” Cr Kidd said.

“During this time access to buildings will be maintained and all businesses will be operating as normal. At times, there may be alternate access routes.

“To reduce the inconvenience to businesses, the footpath sections directly in front of shop access points will be done outside of normal business hours, or when the businesses are the quietest.

“This next phase is a major sign of progress after the taxi rank upgrade was completed last week.

“The bottom rank is now mobility friendly with a raised platform level with the footpath designed to make the rank more accessible.

“The upgrade of the eastern side footpath, from asphalt to concrete and the rank enhancement took under six weeks to complete.

“I’d like to thank everyone again, particularly taxi drivers, for their patience during that time.”

There will be no parking available on the western side of the block during the next phase of the upgrade, however parking has been returned to opposite side of the street.

This stage of the project is expected to take about four weeks to complete, weather depending.