Orange City Council routinely tests all its main dams for blue green algae. The tests are performed by external laboratories and assessed against drinking water and recreation guidelines. 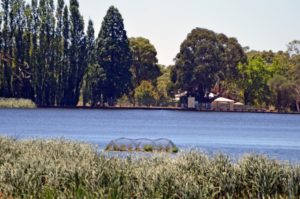 GOSLING :  The levels of algae in Gosling Creek dam have now reached the ‘red’ alert level.

Yesterday our water team was advised that Gosling Creek dam had reached the red alert level. Signs were erected on site at Gosling Monday afternoon advising that there’s to be no swimming or eating of fish caught in the dam.

The high level of blue-green algae is about a number of factors that can include higher water temperatures, ratios of nutrient levels in the water, and low flows of water-run-off into the dam.

We’re at the mercy of the weather. It’s a problem that can’t be fixed until there’s rain.

Gosling Creek will host a round of the state triathlon championship this weekend. Organisers have decided to go ahead with the event, running a run/bike/run format with no swim leg.

Lake Canobolas, Suma Park and Spring Creek dams are all rated as green and do not pose a threat to recreational or domestic use.