By Council CommunicationsJuly 14, 2020News
No Comments

One of Orange’s sporting hubs, Wade Park, will get a welcome upgrade courtesy of a $100,000 grant from the Australian Government.

The funding will replace the old grandstand seats with modern, flip-up seating which will increase the ability for both spectators and cleaners to move in-between seats.

Orange Mayor Cr Reg Kidd has welcomed news of the grant as a boost for sports facilities in Orange.

“It’s good to be working in partnership with the Australian Government to improve the quality of key sporting facilities in Orange,” Cr Reg Kidd said. “Wade Park is Orange’s main sporting venue and the grandstand plays an important role for spectators at sporting events.” 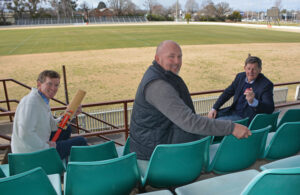 “The existing seats has done very well since we bought them second-hand from the SCG about fifteen years ago, but now’s the time for them to be replaced. Council has also added some extra funding on top of the grant and we’ve appointed a contractor to do some painting.”

Member for Calare Andrew Gee, was thrilled with the funding allocation and is looking forward to the work at Wade Park commencing.

“Wade Park has a long history as a key sporting venue here in Orange,” Mr Gee said. “It’s been the scene of many memorable sporting battles and this funding will help it play host to them for many years to come.”

“It has hosted AFL teams, A-League soccer games and Big Bash cricket clashes, as well as a multitude of local sports.  These funds will also ensure a day at the footy or cricket will be a little more comfortable with an upgrade to the grandstand seating.

“Hopefully our region will remain COVID-free so that real spectators can enjoy the comfortable new seating rather than the cardboard cut-outs that have appeared at so many sporting events recently,” Mr Gee said.

The 700 new seats have been ordered for the grandstand and they’re expected to be installed in October .