The latest stage of Orange’s Southern Feeder Road is set to go to tender in the coming months after the completion of an independent review of the environmental impact of the proposed road.

Orange City Council is working on plans to build Stage 3 of the Southern Feeder road from Elsham Avenue to the Mitchell Highway. The two kilometre section of the road follows the path Dairy Creek Road, alongside the Leewood Industrial Estate, to create a new intersection with the highway.

The Review of Environmental Factors (REF) was completed by Orange-based consultants, Premise. According to the consultants’ report : “The assessment demonstrated the activity as proposed would not have a significant effect on the environment.”

Orange mayor Cr Reg Kidd said he was pleased to see progress on the road project.
“The REF is a key element of any major road project like this,” Cr Reg Kidd said. “It means an independent expert has cast a critical eye over the project looking for any potential problems around topics such as noise, heritage, groundwater and other environmental issues.”

“The completion of the REF means the already advanced design of the road can be finalised so the project can out to tender soon, probably in September. That means we’re on track for work to begin this year. 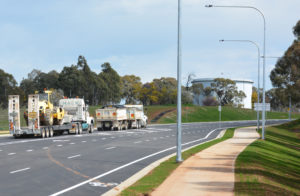 CONNECTIONS: Trucks travelling along the first stage of the Southern Feeder Road, between Forest Road and Anson Street.

“There’s only a minimal environmental impact with a project like this because we’re looking at expanding an existing road. While it’s expected there will be some minor loss of trees, we’re looking at steps such as saving the large tree trunks, which have nesting hollows, to use in a new location.

“When completed, this upgraded road will deliver a high quality link between the highway on Orange’s eastern outskirts through to a key industrial estate, the health precinct and the new Shiralee housing are as it develops. ”

“I’m very pleased and proud that the Federal Government is investing a total of $6.45 million into the Southern Feeder road project,” said Mr Gee.

“I’ve had excellent feedback from the community and they are really looking forward to the project progressing to the next stage.”

Discussions are being finalised with the RMS about the design of the intersection between the new road and the highway. The road will also include intersections with Kurim Ave, Lone Pine Ave and Calton Road.