Footpath lighting has been improved in several areas around Orange in a bid to increase community safety. 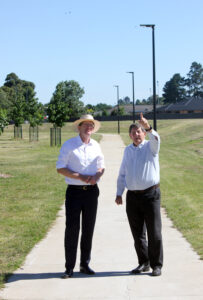 The improvements were delivered with $471,681 in funding from Stage 2 of the Australian Government’s Safer Communities Fund, which supports councils and community organisations to reduce crime and antisocial behaviour by funding crime prevention and security initiatives.

New CCTV cameras in these and other areas, and upgrades to existing cameras were also included in the funding and had already been installed.

“Lighting, limited surveillance and low use of poorly lit areas were highlighted as major contributing factors for increased anti-social behaviour in these areas,” Cr Kidd said.

“This funding will provide increased safety in five locations where local residents, government and non-government agencies are working tirelessly to improve safety in their communities.”

“The project is expected to reduce criminal activity in the area, while improved safety infrastructure will enable use of the areas at night, with more opportunities for community projects and activities to build neighbourhood pride and harmony.”

The solar lights were chosen to save on energy costs in areas where there was plenty of open space, while the tree canopy in Elephant Park meant electric lights were needed.

The motion sensors detect movement, increasing the lamp’s output as pedestrians approach and dimming as they pass, ensuring maximum output when required while still providing ambient light and saving power when full output is not necessary.

Member for Calare Andrew Gee congratulated Orange City Council on its delivery of this vital project.

“These critical upgrades ensure that if you are eight or eighty, residents and tourists will feel safer to be out,” Mr Gee said.

“The Safer Communities Fund provides funding to address crime and anti-social behaviour through the implementation of crime prevention and security initiatives such as CCTV and lighting. The Australian Government has made $180 million available under the Fund since 2016-17.”