Light Up Orange to welcome the New Year in spectacular style

The event will be hosted by Light Up Central West, a not-for-profit group formed by local business representatives to support the Central West economy.

Orange City Council provided $30,000 for the event and joins Kennards Hire and Newcrest Mining as a major sponsor. 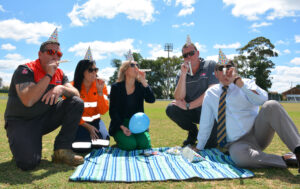 Orange Mayor Reg Kidd congratulated the organisers for getting the New Year’s Eve party off the ground and thanked them for persisting with planning amid the uncertainty of COVID-19 restrictions.

“This year especially, it is important for everyone to celebrate their achievements, however big or small, in what has been a very challenging time,” Cr Kidd said.

“I think the Orange community has a lot to celebrate and be hopeful for in the New Year, and I encourage residents to get out and enjoy the event with family and friends.”

“A light show is a more modern, safer approach than the traditional fireworks and can incorporate sound and visual elements to tell a story,” Mr McMahon said.

“For the first year of Light Up Orange 2020 we wanted to go back to the beginning to the story of the first people of our land.

“We’re working with the Orange Aboriginal Medical Service and the Aboriginal Lands Council to create two laser shows, an extended Welcome to Country and a story about the Wiradjuri people of this region, while a third show will be a celebration of the New Year.”

Local food providers will offer lots of delicious food options at the event, and people can bring their own picnic. Ticket-holders are encouraged to bring picnic rugs and chairs. There will be loads of space for lawn games. Pets are not permitted.

Tickets are available from Eventbrite or via the Light Up Orange 2020 Facebook page.

Proceeds will go to Give Me 5 For Kids to purchase equipment for the children’s ward at Orange Health Service.