Construction of the new toilet block in Robertson Park is now complete.

The $195,000 toilet block contains 3 separate toilet cubicles, including one accessible toilet and change table. The building is made of similarly-coloured brick and materials to match the nearby CWA hall.

The toilets feature a skylight, a paved pergola entrance, and exterior CCTV to monitor activity in the park surrounding the building.

Orange Mayor Reg Kidd said he is pleased to see the toilet block come to life, now ready to serve the community and passing visitors.

“It may have taken a few years to get the toilets here, but it’s great to see them here now. This will mean local residents have an alternative to the public toilets located in the cultural precinct at Cook Park. These toilets will entice both single vehicles and large bus-loads of travellers to stop right here in the CBD to stretch their legs, get a bite to eat downtown and use the loos before they head off again,” Cr Kidd said. 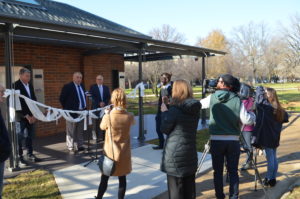 Cr Glenn Taylor along with a number of other Councillors, has been championing the construction of the new toilet blocks for some time and said he too is pleased to know that the long-awaited project is now complete.

“It’s fantastic to see the toilets here. This has been something the community have been asking for, for years and I’m glad I could be a part of making that become a reality, along with a number of my fellow Councillors.

“One concern the community had was that the toilet block wouldn’t compliment the heritage of the park, but it’s easy to see that the new facilities compliment it nicely,” Cr Taylor said.

The toilets will be open during daylight hours only, with the exception of night time events.

The Sir Neville Howse memorial that was removed for the construction of the toilet block is still to be relocated.