A review of the planning guidelines which protect heritage buildings and zones in Orange is recommending:

Orange Mayor Reg Kidd said that it’s important for local residents to be aware of the proposed changes to Orange’s heritage conservation arrangements. 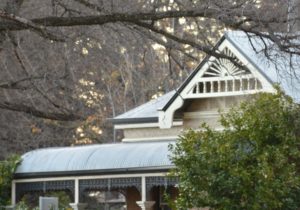 HERITAGE : An expansion of Orange’s system of heritage conservation zones has been proposed.

“Orange has a brilliant collection of heritage houses and this Heritage Study is part of the foundations of our local planning controls. These are the tools the community can use to make sure these homes and heritage zones are protected,” Cr Reg Kidd said.

“Our last heritage study was done in 2012, so it’s important that these tools are kept up to date.

“It’s also important that the community understand what they mean and how it could affect local properties. Now’s the time for people to have their say.”

The Heritage Study Review, was drafted after a range of submissions from the community along with members of the Council’s Cultural Heritage Committee and others who attended workshops last year. The draft study has now been placed on exhibition for community comment.

The proposal also includes a change to the names of the current heritage conservation areas so that they can more clearly reflect local history.

No changes are recommended to the Lucknow and Spring Hill heritage conservation areas.

What will the new expanded zones mean for residents renovating their house?

The proposed heritage conservation areas to be re-named and expanded would be:

The review also considered the topic of guidelines and controls for development in heritage areas. It was recommended that this matter requires updating in line with the general changes instituted by other Councils in NSW and that this should be a topic for a follow on study.

The review also recommends further investigation of a number of properties in the Huntley area, which have been nominated for local heritage listing.

The draft study is now on exhibition for community comment. The deadline for comment is Friday 31 July. The locations of the thirty six places nominated to be added to the local heritage lists can also be found in the draft study.

Once the exhibition period has concluded and all the received submissions have been considered, a final report will be considered by Council. Once adopted, the recommendations within the heritage study review report will then be the subject of a planning proposal to amend the Local Environmental Plan 2011 to legislate the changes.

Orange City Council has this week written around 1800 letters to residents in the areas affected by the proposed changes.

More details can be found on the YourSay Orange website.

Orange City Council is also planning to stage a drop-in information session when residents can ask their questions face to face. Council planning staff and the heritage consultants will host the session on Wednesday, 22 July 2020 from 9am to 12 noon in the theatre foyer at the Civic Theatre.