Many of Orange’s lost pets are being reunited with their families within a day of coming into contact with Orange City Council’s new system for dealing with stray pets.

Council began using its new system, in March 2018, when members of the public could choose to drop off found pets to Canobolas Family Pet Hospital and if owners were not found, animals would be transferred to a private pound facility.

Figures for the first full month of operation, April, have been compiled.

During the month, 97 dogs and 29 cats were brought into Canobolas Family Pet Hospital, or found by Orange City Council rangers.

Of those, 55 dogs and three cats were returned to their families within a day or two of being found and, later, 20 cats and 21 dogs were sent to organisations for rehoming.

were returned to their owners

or sent for re-homing, during

the first month of the council’s

new system of dealing with strays|

Orange Mayor Reg Kidd said the number of animals going straight home to their owners could be vastly improved.

“I am calling on every dog and cat owner in this city to microchip your pet,” Cr Kidd said.

“It’s a sad reality that if your pet isn’t microchipped then it becomes very difficult to get your furry friend back home to you.

“We’ve had a great deal of success with the Council’s Reuniting Orange Pets Facebook page but sometimes it isn’t enough and the pets end up at our pound.”
Animals in Council care were euthanised because of health or behavioural concerns. 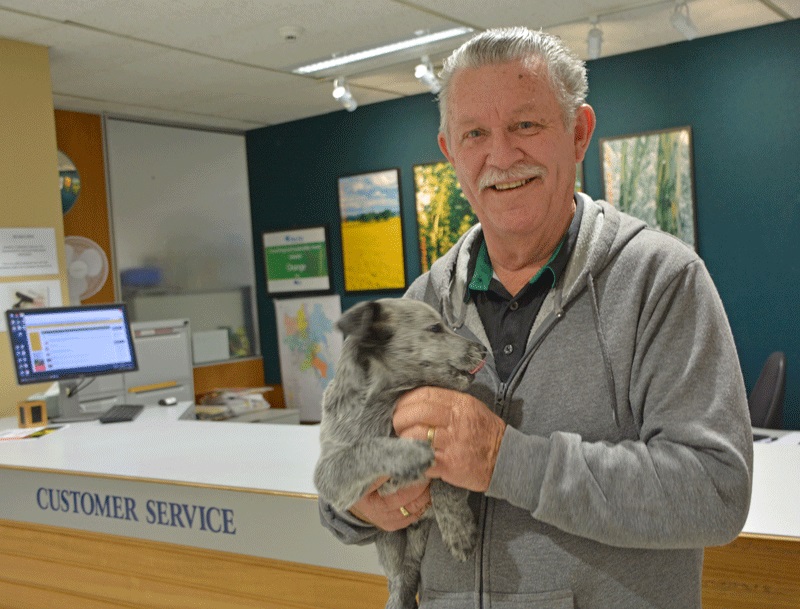 HOME AGAIN : Dog owner Graeme Burns was pleased to be re-united with his escaped cattle-dog pup.

Orange City Council’s Companion Animals Committee Chair Stephen Nugent said the euthanasia of sick and injured pets could have been prevented with proper care and treatment by pet owners.

“Especially when I hear that puppies have come in with parvovirus, it is sad because it’s an easily preventable deadly disease, and there’s a vaccination for it.

“Every effort is being made to find healthy animals a new home but it is certainly a difficult task.”

Cr Nugent said it was unrealistic and unsafe for Council to rehome animals who showed clear behavioural concerns.

“Our staff are well trained and able to ascertain whether a dog is suitable for rehoming,” Cr Nugent said.

“The harsh truth is, it is simply not safe, nor ethical to send animals to a new home when there is a known risk that animal may attack its owner.

“In an ideal world we’d love to save every animal that comes into our care but we cannot and will not accept that risk to the community.

“We intend to be honest and open with what we are doing with the pets that come into our care.

“We’re asking the community to be responsible pet owners and desex, vaccinate and microchip your pets.”

In total Orange City Council made the decision to euthanise 21 animals.

There were eight dogs and one cat euthanaised because they were assessed and deemed unsuitable for rehoming because of behavioural concerns and one dog was a restricted breed.

There were three puppies who had parvovirus, one dog had an advanced cancer, a cat had two broken hind legs, one with a spinal injury and another arrived at the clinic barely alive.

Another two pets suffered significant health problems after being neglected after their previous owners had died, and two cats had become aggressive after being abandoned at a house when the tenants moved out.