Motorists urged to be aware of traffic changes at northern bypass

The new $5 million roundabout on the Northern Distributor Road at William Maker Drive is taking shape and drivers are urged to be aware of traffic changes and possible delays in the area.

Parts of the bypass are being widened to accommodate the dual-lane roundabout, while the re-alignment of the top end of Hill Street to meet up with the roundabout is almost complete. 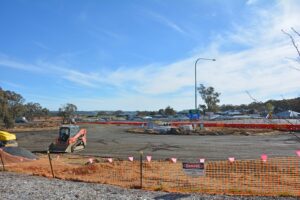 TRAFFIC CHANGES: Drivers are urged to be aware of traffic changes on the northern bypass near the new roundabout.

The new part of Hill Street is open to people accessing the Orange Adventure Playground and Orange Botanic Gardens, while the old part is still being used to link up with the bypass.

The old part of Hill Street will be closed when the new part is connected to the new roundabout, which is expected to be around late September.

Drivers still cannot turn right into or out of William Maker Drive at the intersection with the bypass.

The work, which is being completed by local firm Hamcon Civil, is on track to be completed in October.