By Council MediaFebruary 22, 2021News
No Comments

A bicycle education course at Moulder Park will offer a fun, safe area for children to learn to ride their bikes. 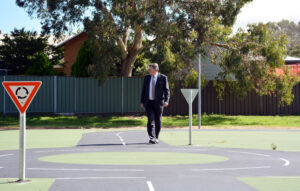 The track was painted in December and replica traffic signs were installed along the track this month.

New seating will provide space for parents and guardians to sit while their children ride their bikes.

Orange Mayor Reg Kidd says the large, flat area at the netball courts has been a popular spot for parents to take their children to learn to ride their bikes over the past few years.

“I’m pleased there is now a formal learn-to-ride area, which will be of great benefit to the children of Orange, where they can learn to ride their bikes safely,” Cr Kidd said.

“This is also a great way to revive the space, which has sat largely unused since the netball courts were opened at Orange PCYC in 2009.

“Council staff are looking at ways to improve the site with features such as landscaping and there is the potential to expand the facility in future.

“Its proximity to the nearby velodrome and skate park also adds another element to that area, creating a unique recreational precinct for the enjoyment of bikes, skateboards and scooters.” 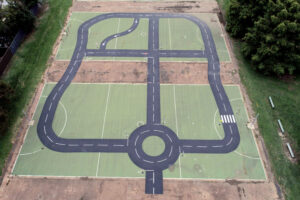 ON TRACK: An aerial view of the bike track.