Australia’s earliest scientific photographs are revealed in a new exhibition, Capturing Nature: early photography at the Australian Museum 1857-1893, that opened to the public at Orange Regional Museum on Monday 1 June 2020.

The images range from the initial tentative experiments in the 1850s to the time when photography was becoming an indispensable part of museum practice in the early 1890s. The subjects vary from a large sunfish and the flipper of a sperm whale to a gorilla and the fragile bones of a flamingo. Most of the specimens photographed at the museum are by taxidermist, Henry Barnes and his son, Henry Barnes Jnr with the help of the AM’s pioneering Curator Gerard Krefft.

Orange Mayor Reg Kidd said he is pleased to see the Museum open its doors with a new exhibition on display.

“The exhibition had been set to open in March, but was unable to open until last week due to COVID-19 shutdowns. It’s great to know that both local residents and visitors can now enjoy all that our Museum has to offer,” Cr Kidd said. 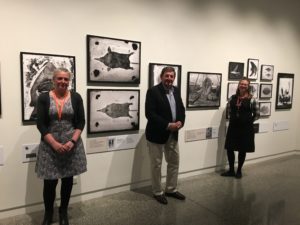 “This exhibition is truly special as it allows visitors to see how photographs were captured and processed in the 1800s. It gives us a sense of appreciation for how moments of time were captured and allows us to compare that to photography nowadays,” Cr Munro said.

Photography at the time was expensive and complicated, so every photograph was carefully planned. The animals were first prepared and posed and then positioned for best natural light and least shadow.

The photos were taken in and around the museum, mostly in the courtyards and gardens to best exploit the precious light required by the photographers’ rudimentary cameras. Alongside the specimens, the figures of scientists can often be seen as a gauge of scale.

Exhibition curator Vanessa Finney explained that through their photography, Krefft and Barnes were spreading the knowledge of Australian science.

“In these days of instant digital images, it’s hard to imagine the effort that went into creating photos during photography’s first century and a half. Each single image was precious — and painstaking to create,” Ms Finney said.

“Their photographs disseminated to the world the image of Australia and its fauna at a time of great international enthusiasm for the fledgling colony’s unusual plants and animals.”

Beautiful, haunting and sometimes strange, Capturing Nature is not only a unique record of early Australian science but also brings to life the story of one of humankind’s greatest inventions.

Capturing Nature is showing at Orange Regional Museum until Sunday 2 August 2020. The Museum is open 9am-4pm daily and entry is free.