Water from an unknown source has delayed progress on a new roundabout at the Icely Rd, Wakeford Street and Winter Street intersection in East Orange.

Orange City Council began work on the project during the school holidays to avoid impact on normal school traffic to the nearby Canobolas High, and the project was due to be completed before next week’s return to school.

However, when excavation work began, water from an unknown underground source starting flowing into the worksite.

Council crews have spent nearly two weeks excavating and checking the multitude of water pipes and other underground services in the immediate area of the intersection for the source. The results of water testing to discover if the water was from a natural spring or an unknown leak from a pipe, were inconclusive. 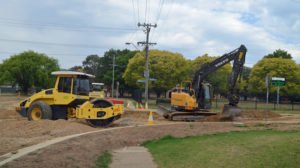 CONSTRUCTION : Plans to build a new roundabout near Canobolas High have been delayed when water innundated the worksite.

The water flow has now been channelled to flow into a nearby drain. The road design has been changed by Council engineers to increase the depth of the pavement foundations and a large quantity of water-logged foundation material has been removed from site.

Efforts to manage the water have put the project about two weeks behind schedule.

The intersection remains closed and the existing detours will remain in place until the works are complete. Council will be installing extra electronic message boards around the school to assist drivers. When school goes back next week, drivers should leave extra time to follow the detour signs.