The first cars and trucks have driven over the new Southern Feeder Road’s railway overpass bridge in Orange.

Community leaders cut the ribbon Saturday morning (13 June) before the first traffic made the trip from Huntley Road to Blowes Road over the bridge that’s the newest section of the southern feeder road.

Orange mayor Reg Kidd said the project was going to make an important contribution to transport links between key areas of Orange. 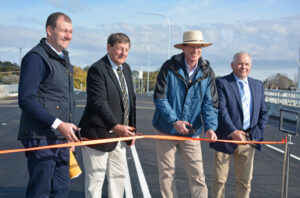 “I’m delighted we can partner with other tiers of government to deliver significant boosts in local infrastructure,” Cr Reg Kidd said.

“As well as making it easier for traffic to get from the highway to the Leewood industrial estate and the health precinct, the new bridge will make it a lot easier for residents of Glenroi to get to sportsgrounds, the hospital and the route to Cadia.”

The bridge and roadworks project, constructed by Haslin Constructions, included :

“These new works will increase freight productivity and make it easier for our farmers to get their produce to market by providing an alternate and more direct route for heavy vehicles accessing the Leewood industrial area,” Andrew Gee said.

“These upgrades, like the overpass vehicles are now driving over for the first time, provides a more direct route for heavy vehicles travelling from the Mitchell Highway to the southern industrial area, which will benefit mining, agriculture, forestry and manufacturing by creating easy, safe and direct access for large vehicles,” Sam Farraway said.