A development application (DA) to build a $20 million conservatorium and planetarium in the North Court precinct has received the support of Orange City Council.

The development, proposed for a site alongside March Street, includes a 3535 square-metre building which will contain: 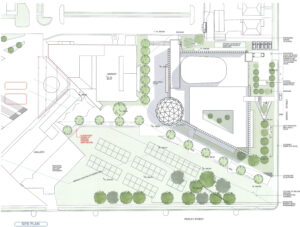 CULTURAL HUB: This site plan shows where the conservatorium and planetarium will be situated at the North Court. Click on the picture to enlarge.

A public plaza, outdoor performance stage and pedestrian connections to other areas of the Civic Precinct are also included in the development.

The DA will be determined by the Western Regional Planning Panel (WRPP), as the council-sponsored project is a ‘regionally significant development’ and exceeds a capital investment value of $5 million.

Councillors voted this week to make a positive submission to the WRPP about the project.

The DA received one submission during the public exhibition period, relating to the reduction of open space in the North Court, parking shortfall and the loss of an informal pedestrian pathway between the Tim Sullivan car park and March Street.

“We will keep pushing for funding to get this project underway as soon as possible,” Cr Kidd said.

“Achieving this planning milestone is one more step towards delivering the kind of shovel-ready projects that governments like to fund.

“This will be a world-class facility and a valuable addition to the cultural life of Orange and the surrounding district.”

This animation shows the concept plan for the project. Some of the details of the development may have changed since it was created.

“The conservatorium has served the Orange community well for many years, but it has reached its use-by date, with the increasing number of students meaning they’ve outgrown the current building,” Cr Turner said.

“It’s great to see a project of this size proposed, which will serve the community well in future.

“The addition of a conservatorium and planetarium to the North Court, in conjunction with the expansion of the gallery, will make the Civic Precinct a thriving cultural hub and a destination the people of Orange can be proud of.”