By Council MediaNovember 21, 2022News
No Comments

Orange City Council is calling on the community to share what improvements they would like to see made at the Orange Adventure Playground.

Council has engaged consultants Civille Pty Ltd to develop a new concept master plan for future upgrades to the playground.

Draft concept designs for an upgraded playground will be brought back to the community for further feedback early in the new year and could inform future budget discussions. Any future upgrades to the playground are estimated to cost between $1.5-$2 million dollars and other funding opportunities will be sought. 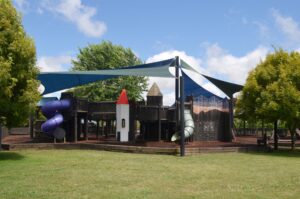 Orange Sport and Recreation Community Committee Chair Tammy Greenhalgh said the Orange Adventure Playground has provided years of enjoyment for the children, families and carers of the Orange region.

“It’s exciting to have this opportunity to look at the playground after 20 years and think about what we like about the current facility and the wider precinct, and what we would like to see there in future,” Cr Greenhalgh said.

More than 1200 Orange residents contributed to the playground’s construction 20 years ago and it has been very much loved by Orange residents and visitors ever since. In 2021 the Orange Adventure Playground received an average of 412 visitors a day.

However, in recent years the timber playground has begun to show signs of deterioration, while community demand for an upgraded regional play facility has increased.

“So many service organisations and community members were devoted to making the playground a reality 20 years ago, and I hope we can all show that same amount of dedication towards creating an exciting, special play space we can enjoy for many more years,” Cr Greenhalgh said.

Anyone interested in contributing their feedback on the Orange Adventure Playground should visit Your Say Orange to complete a survey and share their ideas.

A public consultation day will be held at the Orange Adventure Playground from 10am to 2pm on Saturday 26 November, for residents to share their opinions in person. The consultants will also discuss ideas with service groups, schools, preschools and the original playground committee.

The consultants are keen to hear from anyone who would like to be involved in the design of the playground and are excited to work with the community to create a space that provides as much enjoyment for the next generations of children as the current playground has.