By Council MediaNovember 17, 2021News
No Comments

Last night’s Council meeting was the last before the Dec 4 local government elections.

Last night’s meeting decided to subsidise upgrades to two local buildings, the latest to be supported under the Future City Assistance Fund.

The meeting decided to provide $1805 to the Greek Community of Orange & District  to refurbish the façade of their church at 46 McNamara Street.

The meeting also decided to provide $5000 to the 2nd Orange Scout Club to refurbish the façade of the Scout Hall at 94 Kite Street, Orange. 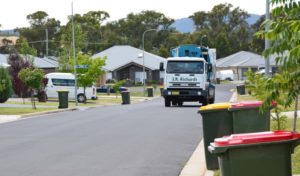 The Orange community generated more waste in the last financial year compared to the previous two years, however a greater proportion of waste is being diverted from landfill, according to a report on waste to last night’s council meeting.

While 59% of household waste was diverted from landfill to recycling, waste streams or organic waste, the diversion rate for commercial and industrial waste was only 26%.

The report found that recycling rates are “significantly below the 2021 targets and should form an ongoing focus for intervention and education programs”.

17% of waste in red-bins could be diverted to the kitchen and garden waste green bins, and

15% of waste in red bins could be placed in the yellow-lidded recycling bins.

Orange City Council is set to enter into a new agreement with Services NSW to provide support to local businesses.

A new partnership agreement is being developed to build awareness of specialist advice services available, ensure Council staff can direct enquiries to these services and provide applicants with the skills to be better informed and researched prior to lodging any applications.

The meeting acknowledged a mayoral minute asking for the next Council to consider having a referendum to assess the community’s attitude towards having nine Councillors instead of twelve.

The meeting decided make a donation of $1000 from the Small Donations Program to Anglicare for a 2021 Christmas Party for Children and Carers using Out-of-Home Care.