After two years of budgets designed to assist the community to recover from COVID-19, Orange City Council’s financial plans for the coming financial year return to a routine budget aimed at making progress on key major projects.

The 19 April Council meeting voted to put the proposed budget for the 2022/23 financial year on display for community comment.

The draft budget reveals plans to spend $68.1 million on capital projects in the coming year, with a consolidated operating deficit of $931,748. The projects will be funded by a mix of government grants, council reserves and property sales. 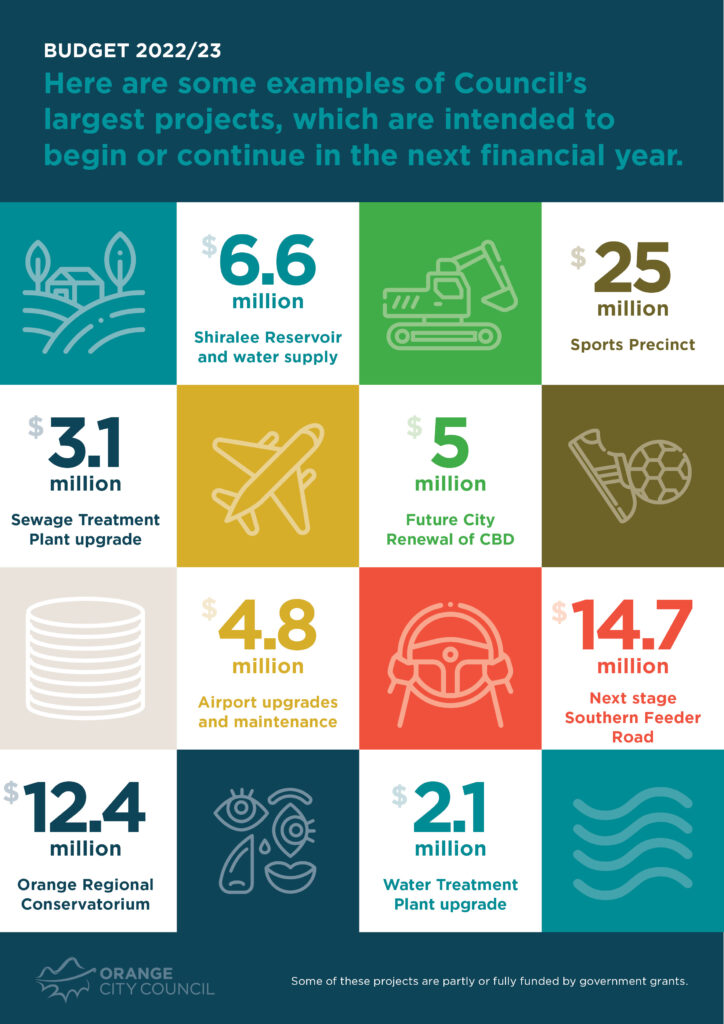 The major capital projects that will see progress during the next 12 months are:

The list of key projects planned for next year includes:

Orange Mayor Jason Hamling said he was pleased the coming year would see more progress on a number of key projects.

“Due to the election in December, this budget has come together in a shorter than usual period of time,” Cr Jason Hamling said. “While this budget is ‘business as usual’, I’m pleased the funds are there to see more progress on the sports precinct. It’s expected we’ll be looking at a mini  budget in September this year to bring a range of late developments into the mix.”

“We have a significant budget deficit this year but that’s about continuing to deliver the facilities that are needed in a contemporary city like Orange.”

“Ask any builder and they’ll tell you the price of steel and concrete has gone through the roof. As a council we’re working through the impact of what’s expected to be significant increases in the costs of key construction projects. We’re looking for solutions such as staging projects and seeking extra grant funding that will let us get on with the work. There’s no doubt we’ll be relying on support from other tiers of government to deliver projects such as the sports precinct and the conservatorium.”

It’s intended that residential and business rates will rise by 2.5%. While the NSW Government’s Independent Pricing & Regulatory Tribunal (IPART) mandated a rate peg of 0.7%, last night’s meeting decided to apply for an additional special variation of 2.5%. If that is approved, average residential rates will increase by $39.82 per year, or by $1.33 per week, including water, waste and sewer charges. Average business rates will increase by $68.56 or $1.32 per week.

According to a report to the meeting, if the Council isn’t successful in achieving the 2.5% increase, there would be a reduction in the draft rates budget of approximately $620,000 in 2022/23 that would lead to a compound loss of income of over $7 million for the 10 year life of the Council’s long term financial plan.

“The Council has to balance the delivery of services against the pain of any rates increase for residents,” Cr Kevin Duffy said. “As councillors we have to balance any impact against the need to keep the Council in a solid financial position where roads and footpaths can be maintained and major projects can be delivered.”

“It makes more sense to have small rates rises than to pretend that avoiding rate increases isn’t simply pushing a problem further down the road.”

By visiting YourSay Orange residents can:

The draft budget will be on exhibition for community comment for 28 days. A report about community submissions will be brought to a council meeting when the final budget will be considered in June.