Plans to double the capacity of the Forest Road rail bridge in Orange are a step closer with $2 million funding announced for the Orange City Council project.

The proposal is to build another road bridge alongside the existing Forest Road bridge. A 30-metre long bridge deck over the main western rail line will provide a separate south bound lane, parallel to the existing 19-metre long north-bound lane. 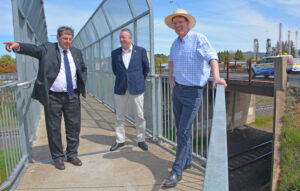 Mayor Cr Reg Kidd said Orange City Council was delighted to be working in partnership with the Australian Government to deliver this key piece of local infrastructure.

“It’s great news that Council will now receive $2 million under Round 5 of the Australian Government’s Bridges Renewal funding, with the balance of the funding to be secured under Restart for NSW from the State and an allocation from Council’s funds,” Cr Kidd said.

“The timing of this project will be crucial to minimise potential disruption. It is planned that this project would go out for tender in the new year with construction to begin once the latest section of the Southern Feeder Road has been completed. This would enable appropriate detours and alternate routes to be in place.

“The project will also extend the current B-double access along Peisley Street beyond the bridge to the South and Cadia mine,” Cr Kidd said.

Member for Calare, Andrew Gee announced the funding when he visited the project site this week.

“This is a project of great significance for Orange,” Mr Gee said “The duplication will make a huge difference to the safety of pedestrians, cyclists and motorists. “

“This bridge gets heavy use including by mine workers, the health workforce at the hospital, and families heading out to Jack Brabham Park for sport.

“A new bridge will see less congestion along Peisley Street and also Anson Street which is used by many school students, teachers and families.

Initial plans by Orange City Council to build the bridge in 2017 were cancelled after tender costs came in higher than the available funding budget.

“The Federal Government previously committed $1.25 million to the project which had been sought by Council before it was cancelled, so I hope this new funding injection of $2 million can now get this project kick-started,” Mr Gee said.

Funding for the project includes: