Orange residents and visitors can feel safer when moving in between the CBD and Prince St with the installation of upgraded footpath lighting along Anson Street.

Six-metre high light poles have been installed along the eastern side of Anson Street from Summer Street extending to the new Department of Planning, Industry and Environment (Armstrong) Building in the first stage of this project.

It’s expected the lights in Anson Street will be turned on for the first time on Friday night (23 October). 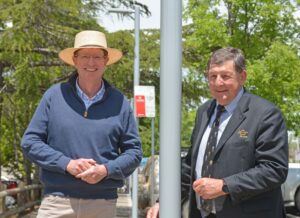 READY TO GO: New footpath lighting in Anson is ready to turn on for the first time. Member for Calare Andrew Gee and Mayor Reg Kidd check out the new LED lamps.

Work is continuing on new footpath lighting in Summer St.

The joint initiative, called the Whiteway project, is the result of a $200,000 contribution from Round — of the Australian Government’s Safer Communities Fund, and a $100,000 investment from Orange City Council.

Orange Mayor Reg Kidd is delighted that the project had reached this important milestone.

“The new LED lighting will also be more energy efficient. We’ll be saving hundreds of thousands of dollars every year.

“Anson Street is one of the busiest streets in Orange,” Mr Gee said.

“Improving the lighting along it, from the main street – Summer Street will boost foot traffic further by making people feel safe.

“Boosting walkability of our streets can have a significant economic impact, reduce the incidence of crime and anti-social behaviour.

“Importantly this initiative ensures that whether there are eight or eighty residents, workers and tourists will feel safe to be out and about,” Mr Gee said.