Orange Regional Gallery’s permanent collection has received a boost, with the addition of a painting by Bathurst-based artist Rachel Ellis.

The painting, Autumn, round from the Hub, Bathurst, 2020, was purchased by the Friends of the Orange Regional Gallery (FORG) after it was exhibited in the gallery’s community exhibition HERE/NOW in February.

FORG is a community organisation that supports the gallery through promoting art appreciation and fundraising to purchase artworks for the permanent collection. 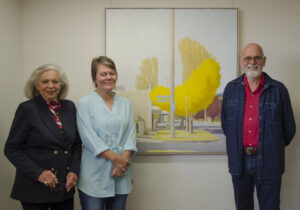 Orange Mayor Reg Kidd thanked FORG for its ongoing support of the gallery.

“Over the past 30 years, FORG has assisted with the purchase of more than 30 significant artworks by nationally celebrated artists, as well as significant works by artists from around the Central West,” Cr Kidd said.

Ms Ellis’ artworks focus on the urban rural environment of Bathurst, where she has lived since 2001, as well as its surrounds in the Central West.

Her work can be found in collections such as the Art Gallery of New South Wales, NSW Parliament House, Bathurst Regional Art Gallery, St Patrick’s Cathedral in Parramatta, and Macquarie Bank.

FORG president Richard Walker said the group, which boast more than 400 members, was pleased to have purchased an additional painting for the collection, at the request of the director.

“The purchase is a stunning oil on linen on board painting. This painting is a classic statement and will enhance the gallery’s expanding collection depicting the urban landscape,” Mr Walker said.

“The exhibition really showed the wealth of talent we have here in the region and provided great exposure and experience for our local artists,” he said.