Orange City Council has awarded the contract to deliver a major upgrade of Lords Place and Byng St to a locally-owned construction company.

Orange firm Awcon Pty Ltd was awarded the contract worth about $1.3 million, the largest single component of the FutureCity upgrade of the two blocks.

The two streets are being transformed into a more pedestrian friendly area to increase foot traffic and deliver an economic boost to the central business district.

There’s been a number of changes to the initial designs, and Orange Mayor Reg Kidd said the construction phase would take about six months.

PLANS: The latest design for Lords Place sees the taxi rank stay in its current position and a new pedestrian crossing positioned in the middle of the block.(CLICK TO SEE LARGER IMAGE)

“As with any major upgrade that’s worth doing there will be inconvenience but we’re aiming to keep it to a minimum,” Cr Kidd said. “We’re putting in new footpaths and re-surfacing the road and adding new wider median strips which will mean access will be restricted at times.”

While the water main is being installed now, the major upgrade begins after ANZAC Day with new kerb and guttering on both sides of Lords Place. This will be followed by new concrete footpaths on both sides.

The key changes to the earlier designs for Lords Place, released in February, are :

The traditional dark-coloured asphalt footpaths alongside Robertson Park will be replaced with concrete footpaths that will be tinted to a darker colour, to blend with the heritage features of the park.

Byng Street will also receive new concrete footpaths on both sides. The northern side footpath in front of the Civic Centre and theatre will be the same as the pebble footpath at the front of the visitors centre and library.

Robertson Park is the back drop for the trees in this block. The design doesn’t change any trees in the park. The overall number of street trees in that block of Lords Place will increase including plantings in a new wider median strip. While seven trees will be removed, 14 will be planted.

Two trees which are either struggling or mis-shapen will be removed. One Plane tree at the southern end of the taxi rank is unbalanced because of nearby trees. An Elm in the roadway at the northern end of the block is also showing signs of stress and is to be removed.

“If anything, these two changes will be good for the canopy of trees in the park, which will continue to extend over the footpath and the roadway,” Cr Reg Kidd said.

“On the western side of the road there are five trees which are of different species and different heights that have been added at different times over the years. There’s a lack of consistency as you look along these trees which don’t actually make a row. They will be removed.”

All new trees will be will be planted in large, underground cell type structures, which give the tree more room to grow in a healthier environment. These structures also stop tree roots from impacting roads, footpaths and underground stormwater systems.

It’s expected the trees will removed in the coming days ahead of the start of work. 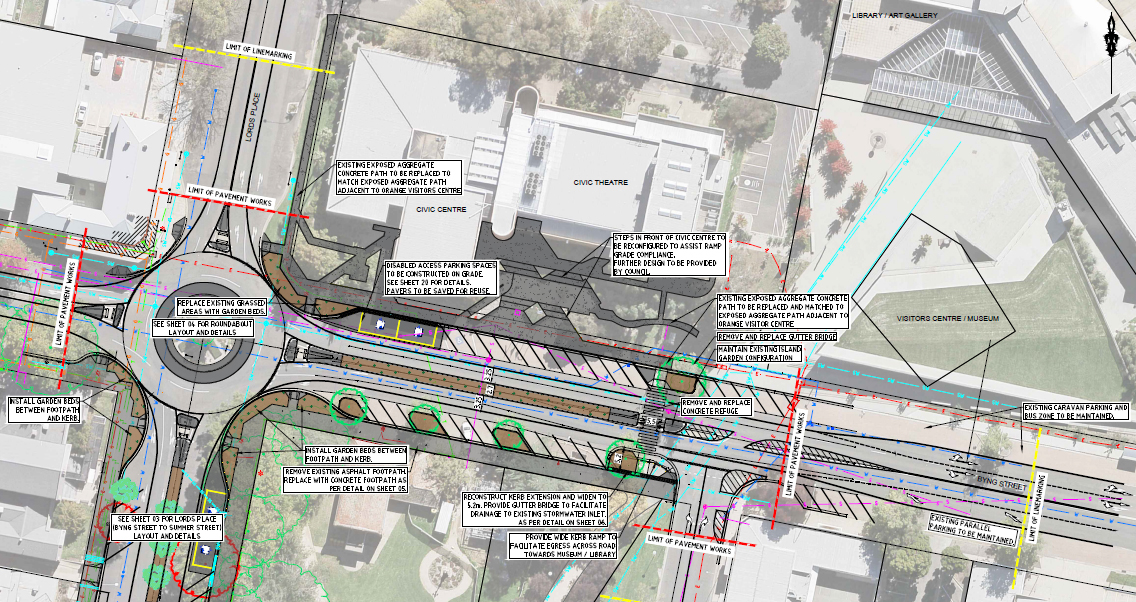 The upgrade also includes changing the Lords Place – Byng Street roundabout from two lanes to one lane. The change will happen by increasing the size of the middle section of the roundabout.

“It’s well documented that reducing roundabouts to one-lane is far safer for both pedestrians and drivers,” Cr Whitton said. “This reduces the chances of a collision considerably and has only a small impact on the flow of traffic.

“The CBD should be a destination, not a thoroughfare. Anyone wanting to go from one end of the city to the other would be encouraged to use alternate routes rather than driving straight through a pedestrian-friendly shopping precinct.”

After further consultation with Council staff, local businesses and taxi operators, the taxi rank will remain in Lords Place rather than being moved to Summer Street, as initially proposed.

Plans for two extra disabled parking spaces in the taxi rank will not go ahead.

The two ‘top’ taxi spaces at the southern end of the rank will be raised to be level with the footpath for the convenience of disabled and elderly passengers.

After consultation with business owners in the area, a turning lane for south bound traffic into the Mid-City Motor Lodge has been included in the design.

During the construction phase, it’s expected the streets will be open, under traffic control for the majority of the work. Intermittent road closures will be kept to a minimum.

Businesses owners in the area have been in consultation with Council staff about the upgrade for several months and attended a forum last Tuesday night. Depending on the weather, it’s planned that the upgrades would be completed by October.