UPDATE December 1: Night work to finish the final layers of hot-mix asphalt on the roundabout will begin on Wednesday night.

The William Maker Drive/ Northern Distributor Road roundabout will be open during the night work however it will be down to one lane only and under traffic control. This means there will be some delays.

Work will begin at 7pm each night and is likely to finish at about 6am each morning. William Maker Drive will be closed during the night work.

November 25: Congestion on the Northern Distributor Road will be eased as of the end of next week as the $5.5 million roundabout at Hill Street and William Maker Drive opens to traffic.

Work on the roundabout began in February and involved a road realignment of Hill Street, which meant building an entire new road from the Orange Botanic Gardens entrance to align with William Maker Drive.

Wet weather, while welcome, delayed the project by several weeks. Initially the roundabout was expected to be completed in late October. The final work is likely to be done by Christmas.

Orange Mayor Reg Kidd thanked Orange drivers for their patience during the construction. 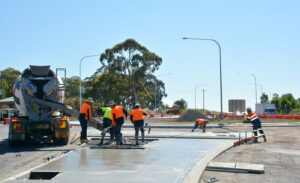 FINISHING TOUCHES: Contractors work to get the roundabout finished ahead of its opening to traffic next week.

“This roundabout will be one of the biggest in our region, and will be taking on up to 15,000 vehicles a day,” Cr Kidd said.

“Local contractor Hamcon Civil has had a tough job building a new road and a new concrete roundabout all while dealing with traffic.

“They’ve kept the Northern Distributor Road open and they’ve done a great job under the circumstances.”

Orange City Council’s Infrastructure Chair Jeff Whitton said he was pleased the only hold-up to peak hour traffic, after next week, would be the 40km/h work zone speed limit.

“The roundabout will be open to traffic, weather permitting, but it’s still a work site,” Cr Whitton said.

“The section, which used to be Hill Street, will undergo some drainage work, guard rails will be installed and it will be line marked to become an overflow car park for the Orange Botanic Gardens precinct.

“The end is in sight, but for the next couple of weeks, avoid the area if you can, if you’re taking the kids to touch footy avoid Anson Street and use the roundabouts at Burrendong Way or Leeds Parade to access the Northern Distributor Road.”

Further layers of hot-mix asphalt on the sections leading up to the roundabout are expected to be laid from Monday. That’s expected to take about a week, depending on the weather.

Council is able to open the roundabout to traffic after these further layers of asphalt are down, a final layer will be laid from about December 7.

This final layer of hot-mix asphalt work is expected to occur at night to limit the impact on drivers. The road will not be closed during this work but it will be under traffic control so expect delays.

For the next two weeks, there are still several traffic restrictions in place:

The current traffic arrangements are:

Weather permitting, all traffic restrictions should be removed by the end of next week.