The 100 kms network of mountain bike tracks proposed for Mt Canobolas should be located in both the state conservation area (SCA) and the pine forests, according to Orange City Council Sport and Recreation Committee chair Cr Jason Hamling.

“It’s understandable why both bushwalkers and cyclists would prefer to spend time amongst the beauty of native trees, rather than a commercial pine forest,” Ct Hamling said. “That’s one reason why the majority of the proposed trails are in the conservation area.”

“It’s also important to remember that a mature pine forest will be thinned out every seven years, and completely logged every thirty years, so any track infrastructure would need to be completely re-built at that point.”

“I’m pleased that the proposed higher impact tracks, which involve jumping are positioned in areas which are less environmentally sensitive, outside the SCA. The narrower tracks proposed for the SCA are purpose-built to prevent erosion. The trails are designed to work with a wide range of riding styles and abilities, so the mountain will be a place where riders can visit again and again.

“The environmental consultants have partnered with some of the best track designers in Australia and the quality of their work is outstanding. The designers were over the moon when they saw what the terrain of Mount Canobolas had to offer, and they’ve delivered a world class network that’s going to draw riders from everywhere.

“The ‘no-go’ areas were mapped by the consultants with stakeholder input. Dirt Art has produced trails that will encourage the development of a shuttle-bus approach to take riders to their  starting points. There are great opportunities here for local businesses. 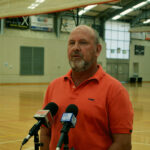 “A professional, budgeted weed management plan is part and parcel of any network of world class bike track network. Weeds have already overrun sections of the SCA and building a track network is the best way of dealing with that problem.”

The latest comments came with the completion of the Preliminary Environmental Impact Assessment (PEIA) to lodge with state authorities. The PEIA is expected to be lodged soon as as part of the development application process to have the project considered by NSW Government authorities as a ‘State Significant Development’.

Cr Hamling also responded to recent community debate about the project, which included criticism of the way the environmental assessment process.

“While it’s crucial to have community scrutiny of this process, it’s also very concerning when you see opponents of the project criticising the work of professional consultants,” Cr Hamling said. “Over several months, they’ve completed detailed ecological assessments on site and the way they did this work is completely inline with the legislative requirements and thorough professional standards.”

This work has included extensive investigation in accordance with the Biodiversity Assessment Method. Information collated from existing databases and reports has helped to inform the desktop assessment which then guided onsite investigation. The requirements for a Biodiversity Development Assessment Report (BDAR) are detailed and prescriptive, and the consultants have been working hard to complete the onsite component in accordance with these requirements.

Assessment in accordance with the BAM includes consideration of all native vegetation, as well as threatened species and ecological communities and their habitats, as well as potential for Serious and Irreversible Impacts (SAII), via the completion of validation plots in the field. The BDAR is currently being prepared in anticipation of requirements likely to be issued by DPIE as part of the preparation of the EIS. Onsite surveys were completed over a number of months, concurrently with the trail walking and constraints identification.

This has involved consultation and site assessment along each proposed trail with the outcome of avoiding all sites and artefacts recorded and encountered.

The ACHA process is a prescriptive, legislated process which has to be followed to the letter. Council’s consultants have been undertaking this process sensitively and in accordance with strict and culturally appropriate protocols.