Local artist Sandon Gibbs-O’Neill is the next artist to create a mural in McNamara Street as part of Orange City Council’s FutureCity upgrade of the area.

Sandon’s Future City Public Art Project mural Community is a contemporary design that draws on aspects of traditional Aboriginal art. The mural is being created on the Canobolas Hotel garage in the McNamara Street carpark. 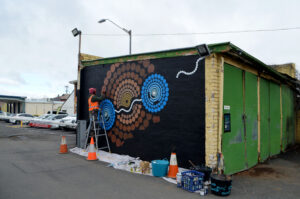 COMMUNITY: Sandon Gibbs-O’Neill works on his mural near the McNamara Street car park.

Three rivers, painted in blue, will reflect the Wiradjuri people, the ‘people of the three rivers’ the Wambool (Macquarie), Kalari (Lachlan) and Murrumbidgee.

Two circular designs joined by a pathway will illustrate past, present and future communities and the importance of sharing knowledge and showing respect. A circle in the background will illustrate the land and how everything is connected.

The use of dots within a circular pattern will reflect community with each dot having an important role in the overall circle. Just as each person plays a vital role in our community.

Community reflects a connection to the land on which we walk and its traditional custodians, the Wiradjuri people.

“Good art invokes a response from people and that’s certainly been the case with the two murals partially completed in the area by Canberra artist Yanni Pounartzis and Orange artist Tully Moore,” Cr Kidd said.

“Both murals are still incomplete but I encourage everyone to take a stroll over to McNamara Street and check out what has been created.”
Orange City Council’s Employment and Economic Development Policy Committee Chair Tony Mileto said Council had invested in public art to encourage people to visit the area.

Sandon said he had received a great response from the community as people watched his artwork take form over the last week.

“People have loved it so far and they’ve stopped to have in depth conversations about it,” he said.