LEDs to light the way for council buildings

Orange City Council will install LED lighting in all of its buildings in a move that will save almost $170,000 a year in energy costs and reduce carbon emissions by 740 tonnes per annum.

At a recent council meeting, councillors endorsed a decision to swap out the lights at a total cost of around $180,000.

It will cover the cost of replacing 2117 fluorescent lights in 17 council buildings with LED lights.

Orange Mayor Reg Kidd said an assessment found lights in the city’s council buildings used almost $170,000 of electricity a year, as well as about $34,000 in maintenance costs.

“The report found if council replaced the lights with approved energy efficient LED lights the money it saved meant it would break even on its investment in just over a year,” Cr Kidd said. 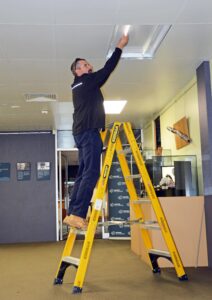 IN WITH THE NEW: Senior electrician Ben Brennan removes an old fluorescent light at the Civic Centre.

The report by energy efficiency consultants said the lights would cost $159,000 to purchase and about $155,000 to install using local installers.

Under the NSW Government’s Energy Savings Scheme, Council would be eligible for more than $130,000 worth of Energy Saving Certificates in return for reducing its energy use.

The scheme seeks to reduce energy consumption in NSW by creating financial incentives for organisations to invest in energy saving projects.

The certificates can then be sold back to parties such as electricity retailers, lowering council’s total cost to about $180,000.

“Anything we can do to save on our electricity costs and reduce our energy use is beneficial, not just for ratepayers, but the environment as well,” Cr Previtera said.

“Even small changes add up and can make a huge difference in the long term.”

The rest of the funds allocated to the 2020/21 renewable energy budget will go towards installing solar panels on three council buildings: the Orange Aquatic Centre, Orange Civic Centre and Cricket Centre of Excellence in Wade Park.