Orange’s newest playground has opened, creating a new play space right on the edge of the CBD.

Part of Orange City Council’s $10 million FutureCity upgrade of the CBD, the playground was designed with a railway theme and operates alongside the park’s miniature steam train railway tracks.

“Our FutureCity upgrade is all about making our city CBD more attractive, to create places where people want to spend more time,” Cr Jason Hamling said. 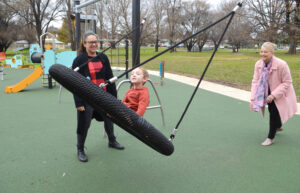 “An essential element of making our CBD more pedestrian friendly is creating places where families can walk to.

“Building a playground right next door to a major car park and across the road from our shopping centre gives families another option when they go shopping.”

Orange City Council’s Sport and Recreation Committee Chair, Cr Tammy Greenhalgh said it was a good idea to add a playground to what has already been built at Matthews Park.

“The steam trains have been a much-loved feature of Matthews Park for many years, and the volunteers do a terrific job of entertaining young children,” Cr Tammy Greenhalgh said.

“The size of the play equipment matches the age group of the children who’ll be taking rides on the steam trains.”

The new project cost $110,000 and includes a range of play equipment, installed with a rubber, soft-fall base and nearby walking paths.

The installation was delayed by heavy rain on the site and crews have installed extra drainage to take water away from the playground area. While construction fences have been removed, sections of safety mesh are still in place to prevent children from moving into damp areas, until  grass can begin to grow.

Park furniture, including tables and benches, will be installed nearby in the coming months once the ground dries out.

Click here to view a map of all the city’s playgrounds.