Work begins this week on a mural in McNamara Street : the first step in Orange’s FutureCity Public Art project.

The mural, being painted on a formerly blank wall of concrete bricks, is designed as a colourful interpretation of Orange’s vineyards that extends from a wall in McNamara Street, over the footpath and onto the road.

Canberra-based artist Yanni Pounartzis and a team of local painting contractors started on the mural on Wednesday. It’s one of four art projects, set to emerge in the coming weeks during the first stage of the project. 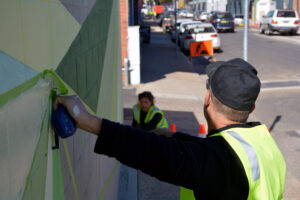 Artist Yanni Pounartzis working on his piece in McNamara Street

Orange artists will also be among the next round of artworks to be installed later this year.

“Yanni Pounartzis is a Canberra-based artist who’s exhibited in Berlin and Sydney as well as created public artworks in Canberra, and it’s fantastic that a street in Orange will be the next backdrop for his work,” Cr Reg Kidd said. “People who follow his work closely say he has a style of painting that plays with perspective and colour.”

“Yanni is creating two works for the Future City Public Art Project. Vineyards is an abstract response to Orange’s many vineyards. Instead of a simple mural that’s a picture on a wall, this work will spill off the wall onto the footpath and over the roadway with green bands of colour.

“His other creation goes by the name of Geometric Shadows. Every street has structures such as light poles and electricity boxes that we walk by every day without noticing. This art work aims at capturing particular moments in time by painting the shadows that these structures cast along the footpaths in McNamara Street. Yanni will be back in Orange in June to complete this artwork once the lane has been resurfaced.”

“FutureCity is about invigorating overlooked spaces in our CBD,” CR Tony Mileto said. “It’s about inviting local residents to turn down a street they haven’t walked through for years, and encouraging visitors to explore engaging urban spaces. As someone walks along McNamara Street, these murals will offer a few surprises together with the usual perspectives.

“The plan is to gradually reveal each of the public artworks as the artists start work on their site. As residents and visitors will see, each project is quite different to the next. Some you’ll love straightaway. Others will be surprising at first, and we’ll come to love them in due course after we see them a few times.”

Artist Yanni Pounartzis is pleased to be working on the project’s first artwork.

“When I visited Orange for the first time several months ago, I was immediately inspired by the local produce and geological terrain,” Yanni Pounartzis said. “As a geometric artist, I was particularly interested in the linear nature of the endless vineyards and the vitality they provide.”

“This mural aims to capture the essence of Orange by paying homage to the vineyards through a non-literal abstract interpretation.”

“Our selection panel were looking for artworks that would invite us to think and feel differently about the urban places we are standing in and which we will notice, rather than wallpaper or filler,” Brad Hammond said.

“Yanni’s project is a great example of this, where a previously bland besser block wall will be transformed into a blazing green geometric pattern that leaps off the wall and onto the street.”

The process so far

The FutureCity Public Art project is a three year program of murals and art installations, to be positioned on and near public and privately-owned buildings.

During the first round, it’s expected public art will be installed in 8 sites across the CBD before the end of this year. Blank walls in McNamara and Anson Streets are set to be among the first to receive artworks.

Earlier this year, fifty artists responded to calls for Expressions of Interest coordinated by the Orange Regional Gallery. From those, 12 were chosen by a selection panel to participate in the development of the public art program.

Under a timetable and as part of paid contracts agreed to by the artists, each has submitted concepts for at least two different locations in Orange.

The options for the proposed murals to be painted on each building were then considered by the building owners, business tenants and a selection panel, before final selections are made.

Selected artists then produced final mock-up designs for specific sites by the end of March.

The first of the new art-works are expected to begin appearing in locations around the CBD during May and June.

This is the first year of a three-year public art strategy and further works will be added in the second and third years of the program.

The list of artists involved in the first instalment of the project is: 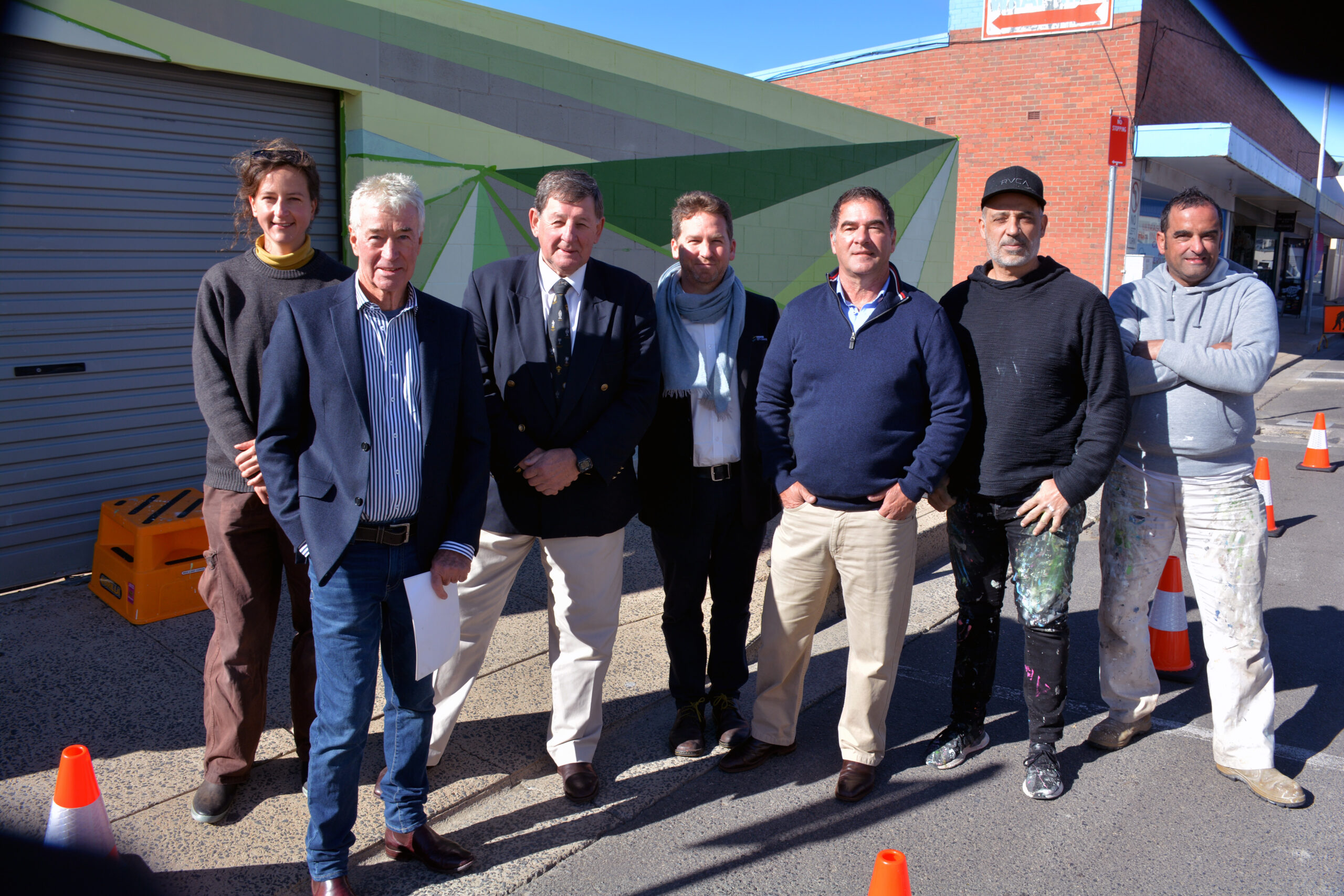