Museum explores past, present and future with two new exhibitions

Two very different exhibitions opened at Orange Regional Museum on Saturday 9 April with More than Tea & Scones: 100 Years of the Country Women’s Association of NSW and How Cities Work.

The CWA was formed in April 1922. The first branch in our region was in Bathurst, formed in March 1924 and closely followed by Orange, Millthorpe, Canowindra and Cudal. The youngest branches were established after the turn of the century, with Byng-Emu Swamp in 2007 and
Bathurst Evening in 2009. 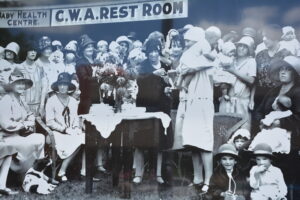 CELEBRATING 100 YEARS: This photo was taken at the CWA Hall in Robertson Park on 21 March. 1929 and is displayed on the side of the hall in Byng Street.

Museum staff worked with CWA branches across the Central Western Group, from Cumnock to Woodstock and Bathurst to Eugowra, to create the display, which packs in 100 years of history, focusing on our regional branches and the extraordinary service provided by country women for country women, over the decades.

“It’s a privilege to share the stories of many dedicated women of the CWA and see more than 140 portraits of current members across the region,” Cr McDonell said.

“The exhibition highlights the importance of the CWA to regional communities and the tenacity of its members, who have been instrumental in the provision of maternal and infant healthcare, support for education, the promotion of primary production and provision of social support networks for 100 years.

The continuing role of the CWA is demonstrated by the diverse work undertaken by branches today, from continuing handcraft and cooking traditions to fundraising, awareness campaigns and advocacy across a range of issues related to local communities.

“The women of the Central Western Group show that the CWA really is ‘more than tea and scones’, through their advocacy for important reginal issues, though they do make a fine scone too,” Cr McDonell said. 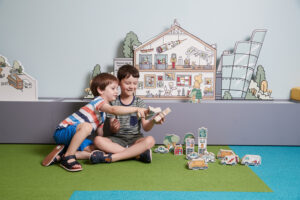 HOW CITIES WORK: The exhibition brings to life the bestselling book of the same name, and is developed in collaboration with the book’s illustrator and city fanatic, James Gulliver Hancock.

More than Tea & Scones: 100 Years of the Country Women’s Association of NSW will run until 27 October 2022.

How Cities Work is a travelling exhibition from Sydney Living Museums and brings to life the bestselling book of the same name, published by Lonely Planet Kids, and is developed in collaboration with the book’s illustrator and city fanatic, James Gulliver Hancock.

From skyscrapers to underground networks, the illustrated two-metre-high cityscape reveals the secret workings of our busy urban centres, with activities including a lively hands-on construction site and a futuristic design station.

Visitors can peek inside buildings, duck underground, see and hear the city come to life with playful animations, bustling sounds and something new to uncover on every street corner.

“This exhibition has arrived just in time for the school holidays and is a great place for kids and families to explore,” Cr McDonell said.

“It will delight visitors big and small with its immersive experience full of tactile and sensory activities. There is something for everyone in this interactive family exhibition,” Cr McDonell said.

How Cities Work will is open at Orange Regional Museum until 17 July 2022.

Both exhibitions were officially opened by Orange Mayor Jason Hamling on Friday 8 April from 6pm. Everyone is welcome to the free event and tickets can be booked via Eventbrite.