The proposal to build a 100 kilometre network of mountain bike trails on Mt Canobolas has reached a new milestone with Orange City Council lodging the paperwork to seek State Government planning approval.

After 12 months of investigation by a team of environmental consultants, archaeologists and track design experts, Council has begun the process with the Department of Industry Planning and Environment (DPIE) for the project to be considered as a State Significant Development (SSD). 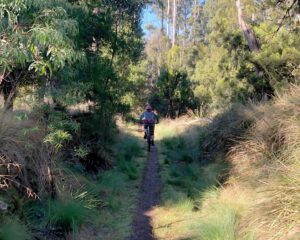 As part of the process DPIE will consider a report called a Preliminary Environmental Impact Assessment (PEIA) compiled by the environmental consultants, The Environmental Factor.

The PEIA provides an overview of the project and considers the potential environmental impacts that may result from the proposed works. Additionally, the PEIA proposes potential mitigation measures or safeguards to avoid, minimise, mitigate or offset these potential impacts.

DPIE will also contact the applicant (Orange City Council)  to seek some more info so that the SSD application can then be lodged.

“The proposed mountain Bike Trail on Mt Canobolas is one of the Council’s generational projects that is going to make a huge difference to our local business economy by drawing enthusiasts from all over Australia,” Cr Jason Hamling said.

“We’re not pretending that a project of this scale is going to happen overnight, but it’s great to see another milestone that could bring us one step closer.

“I acknowledge we are dealing with a very special, environmentally sensitive area on the mountain and for that reason, it must measure up or it won’t go ahead. The lodging of this SSD application will start a thorough independent investigation by a state Government department.”

“Our expert consultants and track designers have done a brilliant job coming up with a network of tracks which we believe can be built around the mountain’s sensitive areas. The proposed routes can also now been seen on a new page on the Council website, which brings the many elements of the project together in the one place.”

More information about the project can be found on this page of the Orange City Council website.

Orange City Council understands that the proposal for a network of mountain bike trails will be assessed by the NSW Government as a tourism development, under State Significant Development (SSD) regulations.

Since the proposal has a Capital Investment Value of more than $10 million and is partially located in an environmentally sensitive area of State significance, it would be assessed for approval by NSW Government under the State Environmental Planning Policy (State and Regional Development) 2011 (SRD SEPP).

It’s understood the planning assessment process will include an analysis of the Preliminary Environmental Impact Assessment (PEIA) and identify further specialist investigations that may be required, as well as provide further opportunity for comments and feedback from members of the community.

Mayor Hamling said there had been some opposition to the project including from members of the local Aboriginal community.

“We want those voices to continue to be heard through the process. We have had discussions on the proposal with the Orange Local Aboriginal Land Council and will continue to do so,” Cr Hamling said.

The project has now been listed on the DPIE site which lists ‘Major Projects’ which have begun being considered under the State Significant Development process.