By Council MediaNovember 22, 2021News
No Comments

Orange Mayor Reg Kidd said the Orange Australia Day Awards are presented to local citizens or groups in recognition of outstanding achievement, or to acknowledge the significant contributions they make to the Orange community.

“Orange is a wonderfully giving community. There are hundreds of unsung heroes in our city whose commitment and dedication makes a significant, positive difference to someone else’s life,” he said.

“We all know someone who goes the extra mile, who gives up their time for the good of others and they deserve to be recognised.” 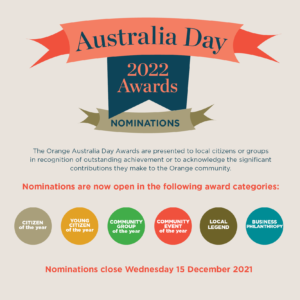 The six award categories are:

Nomination forms can be found on Council’s website here or at the front counter at the Civic Centre building in Byng Street.

Nominations will be accepted until close of business on Wednesday 15 December.

The winners will be announced at Australia Day celebrations in Cook Park on Wednesday 26 January, 2022.