A heart-warming tale about an unlikely hero, Cooper Not Out by Justin Smith has been chosen for the Central West Libraries One Library One Book community read this winter, and readers have the chance to meet the author.
The innovative community reading program encourages everyone in the region to read and discuss the same book at the same time and books have been distributed across the Central West Libraries network in Orange, Blayney, Canowindra, Cowra, Forbes, Manildra and Molong.

Orange City Council’s Services Policy Committee Chair, Councillor Mel McDonell encourages everyone to read the book and share it with friends and family.

PAGETURNER: Orange City Library staff are enjoying Cooper Not Out by Justin Smith as part of Central West Libraries’ One Library One Book program.

“One Library One Book expands on the idea of a local book club and offers readers the chance to share their thoughts and opinions with people all across the region through social media and a range of events,” Cr McDonell said.

“Copies are available at any Central West Libraries branch. Winter is the perfect time to curl up with a good book, so grab a copy and join in the conversation.”

Cooper Not Out is a funny, heart-warming novel set against a backdrop of real events. It is moving and highly original tale about friendship and belief, and the joy of being true to yourself and discovering your greatest potential.

Author Justin Smith will be touring the Central West later this month to talk about the book with local readers.

“I’m thrilled Cooper Not Out has been chosen for the One Library, One Book initiative,” Justin Smith said.

“This is a fantastic idea and I hope people enjoy reading about Roy Cooper. I worked in radio for a few years in the Central West, and I’m very much looking forward to getting back there,” he said.

Meet Cooper Not Out author Justin Smith at:

Cooper Not Out is available to borrow from any Central West Libraries branch. People wishing to attend the author events should visit Eventbrite to book their free tickets. 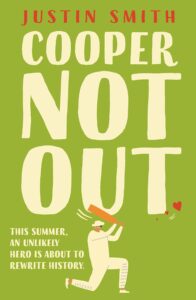 More about the book Cooper Not Out

An unlikely hero is about to rewrite history.

It’s the summer of 1984, the West Indian cricket team is touring Australia, and the Aussies are getting flogged. Then, a very unlikely hero steps up to the crease…

Sergeant Roy Cooper is a country policeman in the small country town of Penguin Hill. He’s been batting for his local cricket club for decades – where he’s a statistical miracle. He’s overweight, he makes very few runs, he’s not pretty to watch, but he’s never been dismissed.

When young local schoolgirl Cassie chances upon the story, she takes it all the way to Donna Garrett, a renowned sport columnist from a Melbourne newspaper who’s forced to write under the male pseudonym of “Don” Garrett to be taken seriously. The Australian people’s love of cricket is lower than it’s ever been. But Donna’s columns on Roy Cooper ignite a new passion and soon there’s pressure to select him for the national team.

Despite pushback from the cricket establishment, particularly from an old grump called Sir Walter Grant, who once played for Australia, the people are about to discover that when it comes to sporting miracles, anything is possible, and one R Cooper might just find a way to write himself into sporting history….

More about the author Justin Smith

Justin Smith is a Melbourne writer, journalist and broadcaster. He’s a columnist with the Melbourne Herald Sun and a weekly guest on Channel Seven’s Sunrise program and Sky News. Justin has had a long career in radio as a presenter and executive producer. He has hosted national programs, he was embedded with Australian troops in Afghanistan, and was the Drive host on Sydney’s 2UE. He’s won multiple awards for journalism and broadcasting.