Orange Airport is gearing up for a new era of travel for the city, with the first Qantas flight from Sydney to Orange scheduled for Monday, July 20.

Orange Mayor Reg Kidd said the airport was ready to accommodate increased visitor numbers and welcomed the economic boost they would bring.

“Orange is a thriving regional hub and the airport is an important gateway for business and recreational travellers,” Cr Reg Kidd said. 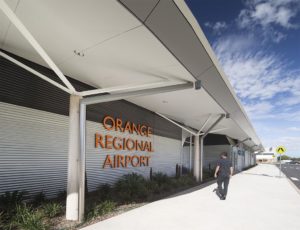 Qantas will have its own check-in desk inside the airport terminal. Qantas operations staff have been setting up computer systems and equipment at the terminal this week.

COVID-19 arrangements are in place inside the terminal including hand sanitizer stations, 1.5-metre social distancing markers on the floor and sneeze shields on the service desks.

Orange City Council Deputy Mayor and Orange Airport Community Committee chair Cr Sam Romano said recent improvements at the airport included expanding the car park and installing better lighting, while further works were about to get underway as part of a $2 million upgrade.

“The car park has been extended on the eastern side and construction is set to begin on another secure 56-space covered car park designed for travellers who are away for several days,” Cr Sam Romano said.

“The roof of the car park will be a huge solar panel array, which will provide additional power to the airport.”

The installation of a large awning over the terminal’s departure and arrival doors will provide better weather protection for passengers, while extra features inside the terminal will offer better technology for business travellers, Wi-Fi, charging points, a large digital display screen and improved lounges for added passenger comfort.