An exhibition exploring Indigenous stories of the night sky has opened at Orange Regional Museum.

Mulaa Giilang: Wiradjuri stories of the night sky draws on tens of thousands of years of cultural tradition and knowledge, and explores how for First Nations people, the earth, sea and sky are intimately connected.

Looking up, the night sky reflects Dreaming stories, landforms, animals and seasonal patterns, informing the way people live on and care for Country. 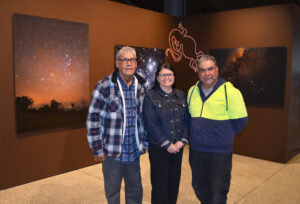 It features stunning night sky photography, much of it taken by Central West photographers including Rodney Watters, Craig Booth and Greg Bradley, as well as incredible panoramic imagery from the European Southern Observatory.

Accompanied by an immersive soundtrack that explores Wiradjuri astronomical knowledge, the exhibition also highlights comparative mythologies from across the world.

The exhibition received significant project funding from the NSW Government’s Local Government Authorities (LGA) Arts and Cultural Program, which enabled the Museum to secure more local Indigenous creative input and produce a short film. Visitors can also access a video of a First Nations AUSLAN interpreter on their smartphone via a QR code.

Orange City Council’s Services Committee Chair, Councillor Mel McDonell, encouraged everyone to come along and wander among the stars.

“The exhibition is a fascinating insight into ancient astronomy and explores the stories and imagery behind some of the most recognisable features of the night sky,” Cr McDonell said.

“This is a great opportunity to share in knowledge passed down for thousands of generations and told with Wiradjuri voices and language.”

Mulaa Giilang: Wiradjuri stories of the night sky will be open from Saturday 6 August to Sunday October 30. The Museum is open from 9am to 4pm every day, and entry is free.