Orange City Council is drawing on the city’s history to enhance the central business district (CBD) as part of its Future City plan.

Large heritage images are being fitted to the windows of vacant shops in a bid to revitalise the streetscape and make walking in the centre of town more enjoyable for locals and visitors alike.

The CBD shopfront activation is part of a Future City business development program that will receive $300,000 a year over two years, which will also offer digital support for businesses.

Orange Mayor Reg Kidd said while the Future City plan included several large-scale, long-term projects to transform the CBD, smaller changes such as this were hugely effective and could be achieved much sooner. 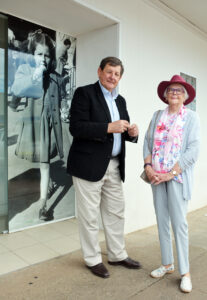 DAYS GONE BY: Orange Mayor Reg Kidd chats with Thel Rossi about this photo of her as a five-year-old.

“This is a project that will make an immediate difference to the CBD,” Cr Reg Kidd said.

“The images will make these premises a point of interest for residents and visitors to our beautiful city and encourage people to spend more time in the CBD, which in turn will provide an opportunity for them to support existing businesses and encourage new ones.”

Initially, about 17 unleased stores will be fitted with historical photos, which have been sourced with the help of Orange and District Historical Society, local historian John Kich and the building owners, with installation by Signarama, McSigns and Midwest Signs.

Property owner Kim Rossi shared a photo of her mother Thel as a child, circa 1945, with her weekly ice cream treat from the Rose Marie Café in Summer Street.

The image appears on the rear window of 182 Summer Street. The shopfront features a photo of a parade passing the building as it heads down Summer Street to mark Australia’s 150th anniversary in 1938.

“I think the photos are very effective. They are eye-catching and uplifting. Not only do they add charm and a uniform character to the CBD, they also highlight the rich history of the city and its people,” Kim said.

“I encourage other premises to do the same, if feasible. They certainly are a talking point for the locals and visitors.”

Other images include workers painting pedestrian crossings, former buildings such as the Rural Bank of NSW and EC Cameron’s dealership, the opening of Coles supermarket, Christmas shoppers in Summer Street, aerial views of the CBD, and an Anzac Day parade.

The images will be on vinyl stickers that will be removed when the shops are leased.