An exhibition celebrating the remarkable life of a local legend has opened at Orange Regional Museum. 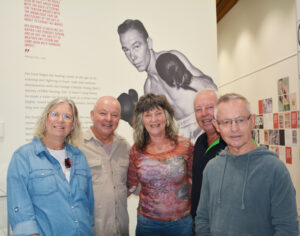 By 1950, he was the NSW and Australian Amateur lightweight champion and, with fellow CYMS boxer Tony Fisher, represented his country at the Canterbury Centennial Games in Christchurch.

Going professional in May 1951, Pat rose quickly through the ranks, claiming both the Australian and Empire (Commonwealth) lightweight titles in 1953, before retiring to run his own butchery in 1955.

Orange Mayor, Reg Kidd, encouraged residents to head to the museum and share the story of one of Orange’s best known sportspeople.

“Pat Ford was an inspiration to local people for many years and the attributes he is known for set an example that is still admired to this day,” he said.

Located in the Museum foyer, the exhibition makes use of the large multi-screen and includes treasures from Orange Regional Museum’s collection, including Pat’s well-worn boxing boots, his Australian and Empire title belt and Boxing Hall of Fame trophy.

“It’s remarkable how many people knew and loved Pat Ford. We’ve had huge interest in the exhibition and look forward to sharing it with locals and visitors to the region,” she said.

Pat Ford’s achievements have been recognised by the Victorian Past & Present Boxing Association, the Orange Sporting Hall of Fame and the Australian National Boxing Hall of Fame.

Beyond the titles and accolades, Pat was admired for his sportsmanship and modesty, his integrity and sharp humour.

He charmed the crowds in Brisbane and Melbourne and always retained a loyal following in Orange, where the next generation remembered him as their friendly local butcher. He died in 2012.

Pat Ford: Pride of Orange will be officially opened at a sold-out event on Friday night.

The exhibition will be on display until October28. Entry is free. 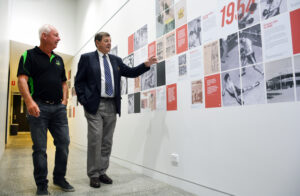