One of Orange Regional Museum’s most popular exhibitions, Pat Ford: Pride of Orange has been made into a book.

The exhibition has been on display at the Museum since May. Celebrating the life of local legend Pat Ford, the ‘boxing butcher’, the exhibition features rarely seen images, film footage and sporting memorabilia.

Pat Ford won numerous amateur and professional boxing titles during his short but remarkable boxing career, including the Australian and Empire (Commonwealth) lightweight titles in 1953, before retiring to run his own butchery in 1955. 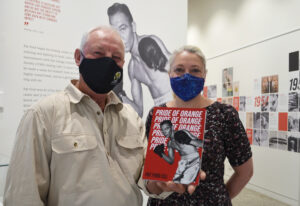 His achievements have been recognised by the Victorian Past & Present Boxing Association, the Orange Sporting Hall of Fame and the Australian National Boxing Hall of Fame.

The exhibition was so popular with Orange residents the opening event was booked out, while more people engaged with social media posts about the exhibition than any other display in the museum’s history. Many people also shared their own images and memories of Pat Ford on social media.

Orange Mayor Reg Kidd said the book would make a great keepsake for the many people who knew the much-loved Orange personality and sportsman, or those who were interested in his story.

“It’s a wonderful idea, as this book means people will still be able to enjoy all the fabulous stories and photographs celebrating Pat Ford’s life and sporting career after the exhibition ends,” Cr Kidd said.

“Pat Ford was an inspiration to many local people and he was admired, not only for his boxing, but also for his sharp humour, modesty and integrity.”

“The exhibition created a lot of interest, which really links to how many people knew and loved Pat Ford through his sport and his butcher shop, and we thought the book would appeal to the wider community,” Cr Munro said.

“When the exhibition was developed it lent itself to a book and we initially produced it for Pat Ford’s children to show our appreciation for their support,” Dr Andrews said.

“They shared many photos and items from their personal collection, which we combined with professional boxing photos from state and national collections and photographs from the Central Western Daily’s negative collection, through the Orange & District Historical Society.”

The book costs $10 and is available from the Orange Visitor Information Centre and Collins Booksellers, Orange.

Pat Ford: Pride of Orange will be displayed at Orange Regional Museum until October 28.