Plans for new apartments on exhibition for community comment

Plans to build new multi-level apartments on the western end of the former base hospital site in Prince Street are on exhibition for community comment.

Orange City Council has received a Development Application (DA) from the Central West based MAAS Group and has written to residents in the neighbourhood to tell them about the project.

The DA asks for approval to build apartment buildings on the vacant land next to the DPIE building in Prince Street. 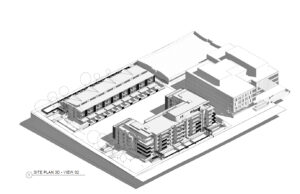 The proposed project will include:

Orange Mayor Jason Hamling is encouraging local residents to find out more about the proposed project and to consider making a submission.

“This is a first for Orange. It’s the first time a proposal for a large, multi-storey apartment block has been put forward and I’m hoping residents take the time to find out more about it, and think about making a submission if they wish,” Cr Jason Hamling said.

As part of the project, a proposed planning agreement will see Orange City Council take ownership of the park area once it has been established. The details of this agreement are also on show for community comment.

While Orange City Council is dealing with the public exhibition of the DA, the consideration of the approval for the project will be handled by the Western Regional Planning Panel (WRPP).

The WRRP will consider the DA because the value of the project is more than the WRRP project threshold of $5 million.

Orange City Council and MAAS have entered an agreement for the sale of the site which will soon be finalised. Until the sale is finalised it also means the WRRP is the consent authority.

Project documents are available on the YourSay Orange website and Orange City Council is organising a public information session to be held on Tuesday, 28 June 2022 at 6pm in the Council Chambers.

The deadline for comments from the community is 5pm on Monday, 18 July 2022.

MULTI-STOREY: A five-storey apartment building featuring 63 apartments is included in the project.