The first stage of Orange City Council’s plans to build a sporting precinct, which includes removing trees on a site alongside Sir Jack Brabham Park, has gone on show for community comment.

Due to the size of the $25 million dollar development, (which includes a new grandstand, a marquee field, eight new sporting fields and a specialist athletics track) planning approval for the project is being handled progressively in stages.

A Development Application (DA) for the first stage of the project, which involves gaining approval for the removal of trees on the site is on exhibition from now until early-February for community comment. Later DAs will look at the design of a grandstand, sports fields and other facilities.

The DA shows the sports precinct would not be built in older-growth areas alongside the hospital, but in a former cleared area that was planted during the 1980s with Radiata pine to mark out the fairways of a golf course.

The report of an independent environmental consultant is part of the DA. The consultant’s assessment of the 28-hectare site alongside the Jack Brabham sporting fields, between Forest Road and Huntley Road, has found the site contains approximately 1,028 trees and shrubs (794 trees and 234 shrubs).

Of the 794 trees, the assessment found:

DISCOVER THE STORIES BEHIND THE NEWS WITH ‘The Orange Podcast’

Find out more about plans for the news sports precinct

Orange Mayor Cr Reg Kidd is hoping the information in the DA will help the community better understand the project.

“There’s been a lot of misunderstanding about the project so far, mostly about the location, and I hope people take the time to look at the project closely before they decide whether or not to support it,” Cr Reg Kidd said. 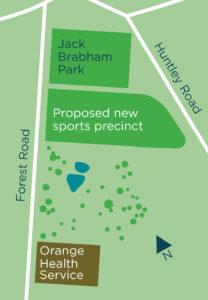 “Most of the criticism I’ve heard so far is from people worried about the loss of trees in an area alongside the hospital. But that’s not where the sports precinct will be built.

“Maps in the DA, which is now available for people to look at, make it clear we’re proposing the new grandstand and new sporting fields are built alongside Jack Brabham Park. We have no plans for any development in the area alongside the hospital.

“The proposed new sports precinct is nowhere near the designed landscaped grounds of Bloomfield hospital. This area was not part of Bloomfield Hospital. In fact it’s several hundred metres from the hospital, and basically is not in view of the hospital.

“Staff are already looking into how the wood from the removed trees could be used. There’s strong interest in the pine trees from a particle board manufacturer and we’ll be looking to make sure any potential sources of valuable timber are put aside.

“Council has done a huge amount of bush regeneration work in that part of town over many years. We’ve planted thousands of trees around Gosling Creek, Hinton Reserve and Bloomfield Park that were overgrown with weeds before we started work.”

“The opportunity to build a $25 million purpose-built sports precinct with a grandstand and marquee field is one that’s too good to miss. This new precinct will benefit Orange residents for generations to come.”

Council had some pre-lodgement consultation with the NSW Heritage Council. Their feedback is now included in the DA papers for the community to look at and respond to.

There are two parallel approval processes happening at the same time. The DA lodged with Council is now on exhibition for community comment. The proposal has also now been lodged with the NSW Heritage Office. While the Heritage Council has provided some feedback based on earlier consultation, it is are yet to formally consider the proposal.

Because of the holiday season, the opportunity for community comment to Council will be longer than usual. The deadline will be Friday 5th February, 2021. It’s likely the DA will be considered by an Orange City Council meeting in March.

Because of the size of the overall sports precinct project, later stages of the development applications for the precinct project will be considered by the Western Region Planning Panel, rather than Orange City Council. 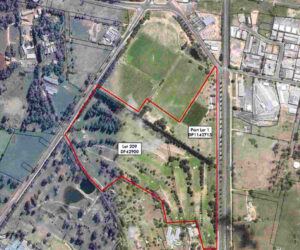 When funding for the new sports precinct was first allocated, Orange City Council began to explore using a site alongside the bypass on the eastern outskirts of Orange. Council went as far as buying land and doing a re-zoning.

While there were some advantages in building the new precinct on a greenfields site, the down-sides were to do with the costs of bringing water, sewer and power to the site. That all cuts into the available budget.

The advantages of the Brabham site were to do with those and other services already being available.

In order to be able to stage major sporting tournaments at the new precinct, there were advantages about the new facilities being alongside existing sports fields.

FIND OUT MORE ABOUT THE DA:

You can download all the official documents for the DA on this page.