Orange City Council and Maas Group Properties have reached an agreement for the sale of the west end of the former Orange Base Hospital site.

The agreement will deliver a high quality medium density residential development in line with the Development Control Plan for the site. It is anticipated the project will create 80 additional jobs in the city. 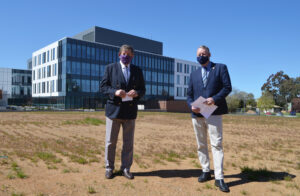 Orange Mayor Reg Kidd said it was a very competitive process and it is great news that a company from the Central West will deliver the landmark development.

“Council adopted a Development Control Plan for the site that details the type of development that is new to Orange. Maas shared that vision and their EOI matched the principles that Council was looking for,” Cr Kidd said.

“The Orange housing market is really good at providing family homes with three bedrooms and a backyard. What is lacking are other options like apartments and townhouses, which are starting to be developed in regional cities across the country,” Cr Taylor said.

“We are doing this with a high quality development on a high profile site on the CBD fringe.”

MAAS group CEO Wes Maas said he is keen to get working.

“103 Prince Street is a ‘once in a lifetime’ project that excites us with the opportunity of committing to the delivery of an iconic regional development that the community of Orange can be proud of; grown and envisioned locally, and delivered with the strongest of local capabilities,” Mr Maas said.

“MAAS Group is committed to the successful delivery of 103 Prince Street, and commits to the Orange community that the economic benefits resulting from a locally developed 103 Prince Street will genuinely cut through to the grass roots of local and permanent MAAS employees, local sub-contractors, local services and consultants, local suppliers and manufacturers.”

“MAAS Group provides a commitment to the community of Orange to continue to support, service and partner with local businesses and Council to realise the strategic vision of Orange being the powerhouse of inland NSW,” Mr Maas said.

The development will include:

The value of the development will be in the order of $30 million. 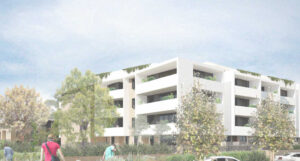 NEW BEGINNINGS: The development of the western end of the old hospital site will deliver 15 townhouses and 61 apartments with a public park in the centre.